In the last decade trans inclusion in Big Two superhero comics has exploded. There had been trans and trans-adjacent characters before, but in eras when trans issues were generally seen as little more than a curiosity — and those characters were often treated as such. The introduction of Alysia Yeoh in 2013 marked the beginning of a wave of trans characters appearing in superhero comics that attempted to show them in a less sensational light.

Since then we’ve seen a number of trans characters introduced by DC and Marvel, such as Dr. Victoria October, Charlene McGowan, and most recently in the DCU, the superheroes Dreamer and Jess Chambers, all mostly followed by great fanfare and media attention. However, they were all preceded by trans superheroine Kate Godwin, created by writer Rachel Pollack in her Doom Patrol run. Kate’s story remains — even 30 years later — among the deepest portrayals of the trans experience in mainstream superhero comics, fueled by Pollack’s own trans experience.

Doom Patrol “was all about people that had problems with their bodies,” Pollack tells Polygon. This is at the heart of her vision of the series — it’s what makes them outsiders even in the fantastical setting of the DC Universe. Bringing a trans woman into that thematic space makes perfect sense. Kate Godwin was not simply there for inclusion dressing. Her transness and experiences informed the story.

The Doom Patrol, created in 1963 by Arnold Drake, Bob Haney, and Bruno Premiani, was a group of normal people whose superpowers had made them extraordinary outsiders to society, debuting just a few months before the similarly themed X-Men. Famously, the team included Robotman, a race car driver who was forced to live the rest of his life in a robotic body after a crash. Alongside him was Negative Man, who, after experiencing severe radiation poisoning, became able to emerge from his own body as a powerful Negative Spirit, but had to wear specially treated bandages at all times to protect others from his radiation-ridden body. The final member of the original trio was Elasti-Girl. Her powers gave her the ability to change the size of her body, or parts of her body, but she was unable to control it and had abandoned society before joining the Doom Patrol. These original members were all brought together by their leader, Niles Caulder, a cold and grumpy paraplegic genius.

Over the years that followed the team’s initial debut, Doom Patrol had been relaunched as a more conventional superhero comic, but that changed when Grant Morrison took over the series, beginning with 1989’s Doom Patrol #19. The writer partnered with (predominantly) artist Richard Case to turn the book to a cult success for the first time and helped set the stage — alongside other boundary-pushing series at the time, such as Hellblazer, Swamp Thing and Morrison’s own Animal Man — for what would later become Vertigo, DC’s former imprint for stranger and more adult-oriented comics.

Morrison’s Doom Patrol was not just a return to the book’s original focus on a team of outsiders, but took the concept even farther, with characters like Crazy Jane, whose powers came from her multiple personalities, and Rebis, a new person who had come to be when Negative Man became fused with a normal woman, giving them both male and female characteristics. Morrison also introduced villains to match the heroes, such as the Brotherhood of Dada, who fought against logic and reason. And when the writer concluded their run with Doom Patrol #63 in 1993, Rachel Pollack, a trans science fiction author new to writing comics, stepped into replace them.

When Pollack introduced Kate Godwin, a trans woman superhero, later that year in Doom Patrol #70, it was subtle. There was no great fanfare or back-patting. Kate was simply shown shopping with a friend. Our only indication that she lived a life different from others is when she said, “When you come down to it, freelance is freelance. Whether it’s programming or turning tricks.” Kate’s trans status was simply and elegantly revealed to the reader with a close-up of a button on her jacket that said “Put a Transsexual Lesbian on the Supreme Court.”

Pollack’s creation process for the character was relatively simple. Pollack tells Polygon that a friend from a trans support group, Chelsea Goodwin, asked her, “Oh, can I be a character? I’ve always wanted to be a character in a comic book.”

“So I thought of her,” Pollack says. “Well, maybe this is a chance to introduce a trans character who would be within the theme of the series.” Kate’s first name was borrowed from activist and theorist Kate Bornstein. And Kate was a trans character shown in a way that we’ve rarely seen since in Big Two superhero comics. She was an outsider who found family among other outsiders, something that for many trans people is still the norm.

At the point Pollack had taken over the book, the team had changed. Robotman and Niles Caulder — now nothing more than a disembodied head — were still around, along with Dorothy, a young girl with ape-like facial features who was a major character in Morrison’s run; George and Marion, a couple always wrapped in bandages; and the Inner Child, a doll filled with the innocence of ghosts. Even by the standards of the Doom Patrol, this was a strange bunch.

But unlike the rest of the team, it wasn’t Kate Godwin’s powers that made her an outsider. Her ability to dissolve or coagulate anything was a useful one, but she was rejected from membership in the Justice League. “I suspect they liked my powers but couldn’t handle me,” she tells the rest of the Doom Patrol. What made Kate Godwin an outsider was being a trans woman.

Alysia Yeoh, created by Gail Simone and Ardian Syaf, the first major contemporary trans characters to hit Big Two comics, was first introduced in 2011’s Batgirl #1 as Barbara Gordon’s new roommate. Her identity as a trans woman isn’t revealed until issue #19, when Barbara opens up to Alysia about how she had once been shot and paralyzed by the Joker. After learning this, Alysia says, “I’m transgender, Barbara.” In a touching moment, Barbara responds by saying, “The people I love call me Babs.” However, while Alysia has stayed around as a supporting character over the decade since, her transness is rarely touched on.

Within two pages we know Dr. Victoria October, introduced in 2017’s Detective Comics #948, is trans. A scientist brought in to help Batman on a case, she doesn’t outright say she’s trans. Instead she refers to how she worked with Batman in her “pupal stage before [she] came into [herself]” and followed it up by saying to Batman, with a playful smile, “I did appreciate the card.” It’s in the next panel that she references having a “deadname,” confirming for the reader that she is a trans woman. However, like Alysia, she mostly fades in as a background character, her transness rarely explored.

Dr. Charlene McGowan, created by Al Ewing and Lee Garbett for Immortal Hulk #6, was also not a superhero, but Ewing and Garbett did explore and reveal the way her trans experience shaped her life over the course of the 50-issue series. After Charlene was arrested for running a black market hormone supply operation, the U.S. government forced her to help its efforts to kill the Hulk. Eventually, she betrayed her captors and switched sides to aid the Hulk.

Connecting her “secret origin” to her transition allowed for a deeper understanding of a character that otherwise didn’t have a ton of time on the page. Also, like the character of Kate Godwin, being part of Hulk’s group of renegades also allows the reader to see that despite McGowan’s brilliance as a scientist, being trans has still made her an outsider, a contrast to Yeoh and October, who spend time with heroes like Batman and Batgirl.

McGowan has since appeared in the team comic miniseries Gamma Flight, co-written by Al Ewing alongside Crystal Frasier, a trans woman. While personal moments for McGowan are rare, they’re often rooted in her transness, such as when her teammate, an extremely mutated Doc Samson, compares his body being wrong to how she feels about her body, upsetting her.

Pollack’s run on Doom Patrol also explored how Kate’s own outsider status could clash with the rest of the team of outsiders. Later in her run, Robotman began to fall for Kate, but when he discovered she was trans, he became angry and felt betrayed. Even though — or maybe because — he existed simply as a brain in a robot body, he clung to his own self-image of masculinity.

“[Robotman] is the straightest person on the team,” Pollack tells Polygon. “And he’s the one who is also most threatened by the issue of bodies. As far as he’s concerned at that point, he doesn’t have one. His robot body is just a piece of machinery that he’s forced to inhabit.”

At one point Robotman screams out at Kate, “You had a penis, right? Maybe you chopped it off, but you had one, right? In my book that makes you a man.” Kate shuts this down by replying, “Really? Then what about you, Cliff? Do you have a penis? What are you?”

The trans women who populate modern superhero comics as side characters aren’t all bad — there’s a place for them. When I bring some of the non-hero trans characters of the last decade to Pollack, she even responds by saying, “A trans superhero gets attention, but I didn’t realize this other thing was going on… I think it’s very nice.”

But to me, true representation comes when we can see our lives and experiences reflected in these characters beyond a cis lens. It’s important to see characters that reflect your life back at you beyond just the surface level of the experience, including trans experience.

”We got some very positive letters,” Pollack says, of the at-the-time reaction to Kate, “including one or two letters from people who quite simply said their lives were saved by this. [That] it kept them from killing themselves, this character.” It’s important to branch out in what we read and not just read stories about ourselves, but there’s also great value in seeing your life in art, in realizing you’re not the only one feeling what you’re feeling. It’s something any piece of trans representation, or any kind of representation, should be striving for.

How would Pollack approach a trans character in a superhero comic if she were writing it today? “I would have her be the main character. I would definitely have her in the current situation,” says Pollack, referring to the heavily politicized battles over trans rights. “And I think if I was doing a story where she was the main character, or a supporting character, I’d have there be some controversy around her. She would be known. She would not be obscure. This would lead to the public, and there’d be a whole big thing about it.”

With Dreamer and Jess Chambers looking to have a bigger role in the DCU — and even characters like Marvel’s brand-new mutant hero Escapade, co-created by Charlie Jane Anders — maybe it will be possible to get stories of superheroes who are also trans and the difficulties that would come with that. Perhaps we could have a trans character “experiencing the current situation.” Until then, we still have Rachel Pollack’s Doom Patrol. 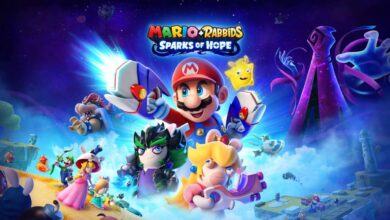 Roundup review for Mario + Rabbids: Sparks of Hope – Did the sequel impress? Trailer for part 3 of The Boys: Karl Urban’s Billy gets a power upgrade