Prosecutors said in federal court Monday that the law does not allow them to seek the death penalty for Former Libyan intelligence officer accused of making bombs destroyed a passenger plane flying over Lockerbie, Scotland, in 1988, killing 270 people, including 190 Americans.

Abu Agela Mas’ud Kheir al-Marimi, 71, made his first appearance in US District Court in Washington on Monday afternoon, a day after US authorities announced that they had extradited him. He will be the first person to be prosecuted in the United States in connection with the attack 34 years ago.

The Justice Department many years ago charged two other men with murder, but Libyan officials never agreed to allow them to appear in an American courtroom. Instead, they were prosecuted by a Scottish court. Officials have so far declined to say what deal they have reached with Libya to bring Mas’ud to the United States.

Mas’ud faces two different criminal charges, including the destruction of an aircraft resulting in death. He could be sentenced to life in prison. Prosecutors told Judge Robin M. Meriweather that although the charges Mas’ud faces today are punishable by death, they were not eligible to receive the death penalty in 1988. .

The Lockerbie bombing has launched a global investigation. Here are the things to know.

Mas’ud, who was born in Tunisia and also has Libyan nationality, appeared with a defense lawyer, limping into the courtroom in a green prison suit. Relatives of victims killed in the bombing were present.

Speaking in Arabic through an interpreter, he told the judge he had the flu and was on medication, and that he wanted his own lawyer but couldn’t. Mas’ud said: “I can’t speak without my lawyer.

Meriweather agreed to postpone the detention hearing until December 27.

Until September 11, 2001, the bombing of a Boeing 747 was the largest terrorist attack against US civilians in history. It led to sanctions on Libya and helped shape the way the FBI handled international investigations.

In 1991, Libyan intelligence agent Abdel Basset Ali al-Megrahi and his alleged accomplice Lamen Khalifa Fhimah were charged in the Lockerbie bombing. Initially, Libya refused to send them to the US or UK for trial, instead handing them over in 1999 to a Scottish court for trial at a former US military base in the Netherlands.

Fhimah was acquitted, while Megrahi was sentenced to life in prison. Megrahi died in 2012, about three years after being released from prison with a cancer diagnosis.

Mas’ud was charged years later, after the FBI obtained a copy of his 2012 interview by a Libyan law enforcement official.

According to the U.S. affidavit filed in support of the criminal case, Mas’ud admitted to building the bomb that shot down the plane and assisting Megrahi and Fhimah in the plot.

Mas’ud has been detained in Libya in an unrelated case.

State Department spokesman Ned Price declined to provide details Monday about what led to his transfer to the United States. “It can be said that this happened in consultation with the appropriate Libyan authorities, and the United States is in regular contact and discussion with our Libyan partners, but I need to leave it at that. there,” Price told reporters at a news conference.

John Hudson contributed to this report. The U.S. Bombed a Dam in Syria That Was on a ‘No-Strike’ List 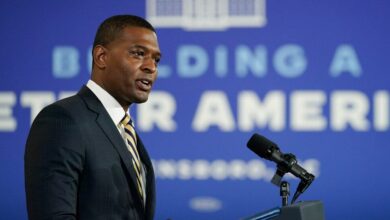