Uganda has confirmed its first death from the virus since 2019

Uganda’s Ministry of Health has announced its first Ebola death in the East African country in three years, and announced an outbreak of a highly contagious rare strain of the virus in the central district of Mubende.

Diana Atwine, permanent secretary of the ministry, said the victim was a 24-year-old man who developed symptoms of the virus and later died.

The patient had high fever, diarrhea, abdominal pain and vomiting blood before death.

“We want to inform the country that we have an Ebola outbreak, which we confirmed yesterday,” Atwine said.

According to the Africa office of the World Health Organization (WHO), 8 people are suspected “Relatively rare Sudanese strain” currently being treated at a hospital in Mubende.

“Uganda is no stranger to effective Ebola control. Thanks to our expertise, action was taken quickly to detect the virus and we were able to build on this knowledge to stop the spread of infections.” Matshidiso Moeti, WHO Regional Director for Africa, said in a statement.

The last time Uganda reported an outbreak of the Sudan strain was in 2012. It was also hit by the Ebola Zaire strain in 2019, with at least five people dying from the disease at the time.

Ebola was identified in 1976 in the Democratic Republic of the Congo (then Zaire), which borders Uganda, and has since killed about 15,000 people across the African continent.

The often fatal viral hemorrhagic fever is spread from person to person through bodily fluids. The natural host of Ebola is bats.

Khamzat Chimaev assisted with the underweight belt at UFC 279

Germany: No single cause for massive Oder River fish die-off 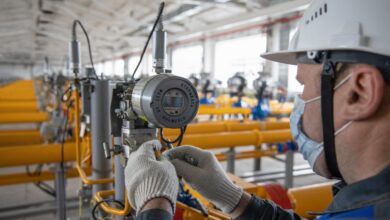 Russia’s energy influence over Europe ‘is nearly over’ Russia details use of hypersonic missiles in Ukraine