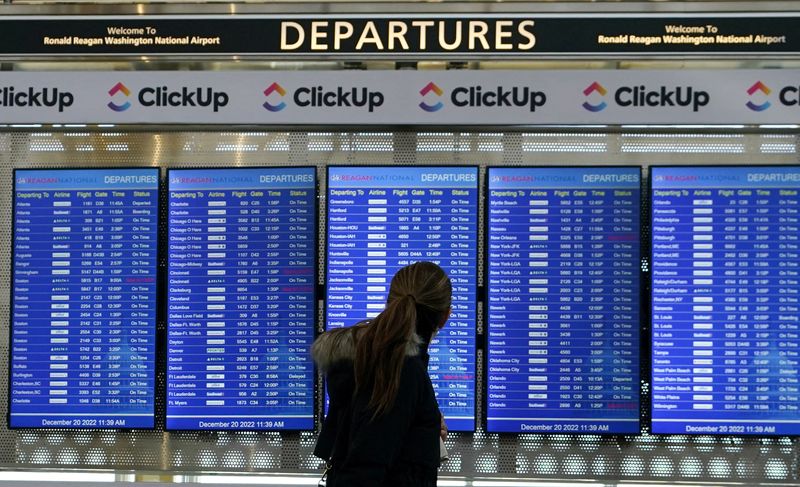 © Reuters. FILE PHOTO: A passenger looks at a flight departure board at Ronald Reagan Washington National Airport as a budding winter storm across the country is likely to cause travel delays ahead of the Christmas break , in Arlington, Virginia, USA,

By David Shepardson and Aishwarya Nair

The extreme weather that coincides with the start of a holiday travel season can be one of the busiest ever.

The Federal Aviation Administration said Thursday that the winter storm is bringing blizzard conditions to the Midwest with major travel disruption expected in Chicago, Detroit and Minneapolis-St. Paul.

More than 1,830 US flights were canceled on Thursday and another 900 flights for Friday were cancelled, according to flight tracking website FlightAware.

So far, 23% of flights departing at Chicago’s O’Hare International Airport and 37% of flights at Chicago Midway were canceled Thursday.

In the seven days ended Wednesday, the Transportation Security Administration said it screened nearly 16.2 million passengers, slightly lower than the 16.5 million screened during the same period in 2019.

Last year’s holiday season was marred by an outbreak of COVID-19 among staff that forced airlines to cancel thousands of flights.

U.S. airlines, including Delta Air Lines (NYSE:), United Airlines and American Airlines (NASDAQ:), said earlier this week that they are waiving change and fare difference for passengers staying in one place. series of affected areas.

American Airlines said Wednesday that it is continuing to monitor the winter storm, which is expected to affect airports in the Midwest, Northeast and East Coast this week, and has canceled 100 flights. as of 1pm ET (15:00 GMT). Factbox-About 1.2 million people without power in US due to winter storms By Reuters At least 84 people infected with E.coli outbreak in 4 states