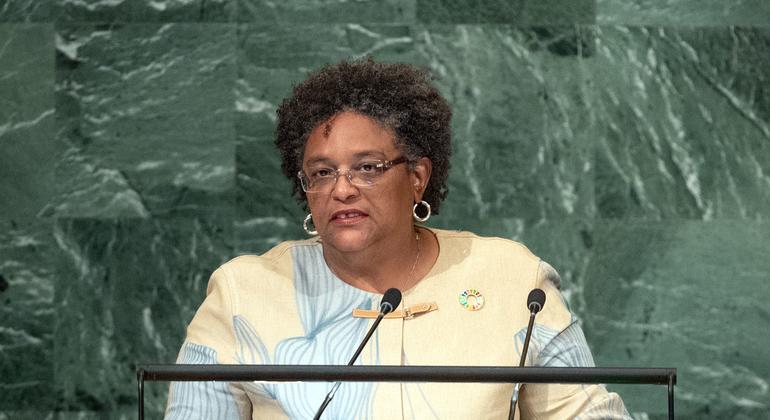 In her speech, Ms. Mottley spoke extensively about the need to reform the aging global financial architecture to better reflect today’s realities, such as helping affected countries by climate easier access to capital.

Indeed, the Bretton Woods Agreement created the World Bank and the International Monetary Fund (IMF) “No longer serve the purpose in the 21st century that they served in the 20th,” she said.

She called for the creation of a global agreement that development finance should not be short-term, but instead should be loans of at least 30 years.

“The world has recognized this by allowing Britain to participate in the refinancing of World War I bonds paid only eight years ago, 100 years after World War I began,” she said.

She also argued that Germany was allowed to limit its debt payments to the equivalent of 5% of its exports, on the premise that the “catastrophic” experience of war would not allow it to finance aid in reconstruction while paying off debts incurred during the war.

“We are no different, we have taken the debt for COVID-19for the climate and now to combat this difficult time of inflation and [supply crisis]. Why [must the] developing world finds money within 7 to 10 years as others benefit from longer maturities to repay debt [loans]? ,’ she asked Congress.

Ms. Mottley also addressed the issue of loss and damage and praised Denmark for becoming the first Central Government of a developed country to propose a fund for this purpose, in practical terms this fund will directly help countries on the front lines of the climate crisis.

“Any attempt to deny that the climate crisis is of man-made origin is an attempt to deceive ourselves and admit that we want to be accomplices in the continued death and loss of life.” Harm ensues to those who are its victims,” ​​she said.

The Prime Minister asked the countries to take responsibility because otherwise, the world will not see the change.

She also emphasized that while small countries like Barbados have made zero commitments, the current state of global affairs, including Atlantic hurricanes, the war in Ukraine and the lack of financial resources, not allowing them to stop accessing their natural gas resources now. .

The Barbados leader also addressed the words of the US President earlier this week and supported a reform Security Council.

“We call an echo for that, but we go further. We believe that a Security Council that holds veto power in the hands of a few, will still lead us to war as we have seen this year, and therefore reform cannot be confined to the composition of the EU. it but also [must include] removing that veto,” she said.

Ms. Mottley also called for reform of the G20 and G7 groups, arguing that Barbados “cannot accept” these “informal governance committees” when they are not represented by African descent and exclude 1.5 billion people in the world.

“How can it be expected to reflect fairness and transparency in its decision-making?” she stressed.

To be able to move from “possibility” to “reality”, she argues, it is essential to embrace a transparent framework that allows those who are losing faith in institutions that equity matters. .

“Justice and togetherness are needed to bring about peace, love and prosperity in this world. And these are not romanticism, these are hard realities that simply require decisions,” she explains.

Finally, the Prime Minister said that world leaders must have mature conversations and talk to their people instead of relying on headlines and audio content, to avoid disconnection between governments. government and government.

“With those commitments, we can make a difference in this world, and let us do the same to realize that a world that reflects the imperial order, hypocrisy and lack of transparency will not achieve that mission, but a world that gives us freedom, transparency and a level playing field will allow for difference,” she concluded.