Beyond Meat said its chief executive Doug Ramsey was suspended, effective immediately, after he was arrested Saturday night for allegedly punching and biting a man in the nose.

The company said in a statement Tuesday afternoon that Jonathan Nelson, the company’s senior vice president of manufacturing operations, will oversee Beyond’s operations on an interim basis.

Ramsey, 53, was charged with terroristic threats and third-degree battery use and was booked into the Washington County jail after allegedly assaulting a driver in a parking garage near Razorback Stadium.

Ramsey allegedly punched through the rear windshield of a Subaru after it made contact with the Ramsey’s front tire, according to a preliminary police report obtained by CNBC. The Subaru owner then stepped out of his car, and Ramsey is said to have started punching him and biting his nose, “the flesh on the tip of his nose,” according to reports. The victim and a witness also allege that Ramsey told the Subaru owner he was going to kill him.

Ramsey has been Beyond Meat CEO since December. News of his arrest after a University of Arkansas football game brought the vegan food company under closer scrutiny, which is already struggling with disappointing sales and investor skepticism. on the company’s long-term growth prospects. The stock is down 75% this year, dragging its market down to $1.02 billion. Just three years ago, the company was valued at $13.4 billion.

Prior to joining Beyond Meat, Ramsey spent three decades at Tyson Foodsmonitor its poultry and McDonald’s businesses. Beyond Meat has drawn on its experience to help the company successfully execute major launches, especially with fast food companies like owner Taco Bell. Brand Yum and McDonald’s.

Ramsey did not respond to CNBC’s request for comment. 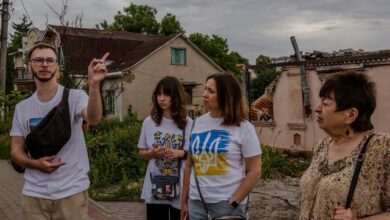 Reunited in Bucha, a Ukrainian family comes to an agreement with the Traumas of war The most read book of the year – The New York Times

What does the queen like with tea? Jam sandwiches every day