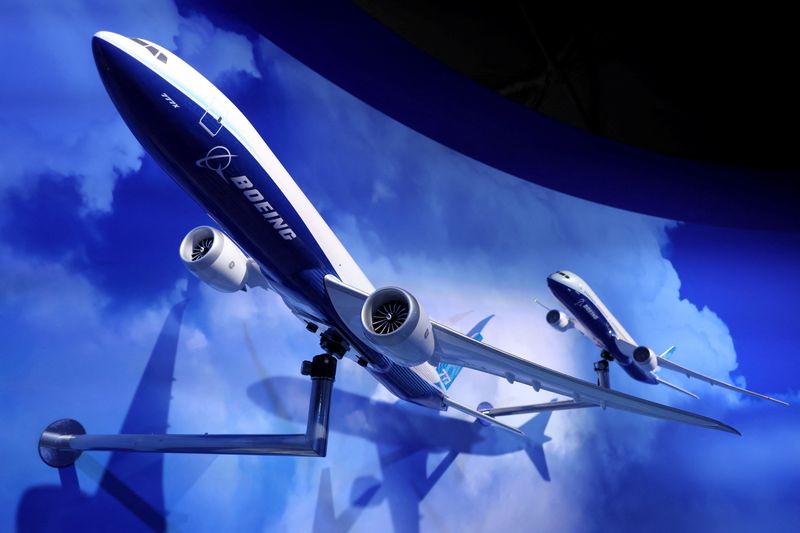 © Reuters. FILE PHOTO: A model of a Boeing 777X is on display at the Farnborough International Air Show, in Farnborough, Britain, July 19, 2022. REUTERS/Matthew Childs

WASHINGTON (Reuters) – Boeing Co said on Thursday it had resumed test flight of its 777X jets after an inspection in October discovered an engine problem.

Last month, GE said it was looking into a technical issue that occurred during technical testing following the plane’s GE9X certification and had decided with Boeing (NYSE:) to remove the engine and send it to an test facility in Ohio to run technical tests.

Boeing in April said it would halt production of the 777X until 2023 and confirmed a delay in the delivery of the first 777X jet to 2025 from its previous goal of late 2023, but said they still believe in the program.

The Federal Aviation Administration warned Boeing in a March 21 letter that current certification schedules for the 737 MAX 10 and 777X are “outdated and no longer reflect program operations.”

Certification is required before Boeing can begin deliveries.

In May 2021, the FAA told Boeing that it would not in fact certify the 777X until mid to late 2023 and denied Boeing’s request to remove the certification barrier, citing numerous concerns about lack of data and lack of preliminary safety assessment. The previous 777X was expected to enter service in June 2020.

Boeing CEO Dave Calhoun said in April that it was “certainly a more rigorous process that we’re all going through” to get the plane certified.

No progress on Ladakh impasse in talks, no word on Arunachal | India News Drugmakers shares steady after Zantac lawsuit tumbles According to Reuters Oil struggles to hold gains amid mixed demand According to Reuters