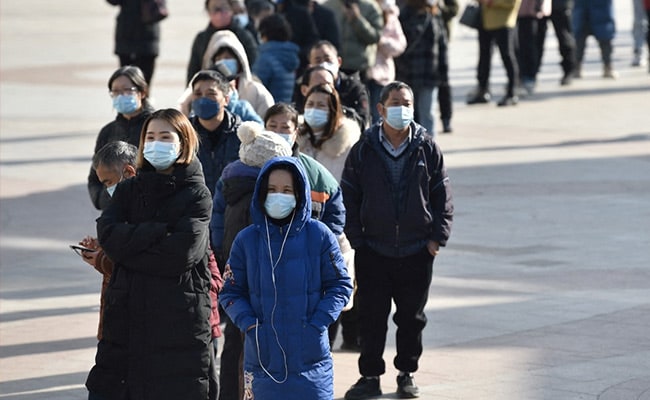 Previously, people who died of illness while contracting the virus were counted as Covid deaths. (File)

China said on Wednesday that not a single person had died from Covid-19 the previous day, after changing its criteria for recording virus deaths to most no longer counted.

But the government said on Tuesday that only people who directly died of respiratory failure caused by the virus were counted in the Covid death count.

Previously, people who died of illness while contracting the virus were counted as Covid deaths. This way of recording Covid deaths accounts for a large number of deaths in other countries.

“Currently after being infected with the Omicron variant, the main cause of death is still underlying diseases,” Wang Guiqiang of Peking University No. 1 Hospital told a press conference of the National Health Commission (NHC).

“The elderly have other underlying medical conditions, only a very small number die directly from respiratory failure due to Covid-19 infection,” he added.

From the northeast to the southwest of the country, crematorium workers told AFP they were struggling to keep up with the rise in the death toll.

Beijing last week admitted the scale of the outbreak had become “untraceable” after the end of mandatory mass testing.

The country recorded 3,049 new Covid-19 cases in the country on Wednesday and no new deaths.

Officially, there have been 5,241 Covid deaths in China since the start of the pandemic.

The US State Department on Monday said the rise in infections in China had become a matter of international concern.

“We know that any time a virus spreads, which is in the wild, it has the potential to mutate and pose a threat to people everywhere,” said State Department spokesman Ned Price. place”.