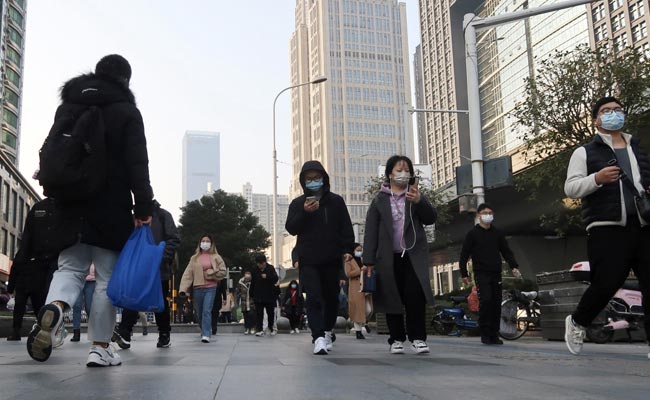 Covid-19 cases are on the rise in the Chinese capital, officials said on Monday, as the country rapidly shifted away from its zero-tolerance strategy with the coronavirus.

Just days after China began easing restrictions, Beijing authorities said more than 22,000 patients had visited hospitals across the city in the previous day – 16 times the number a week ago.

China reported 8,626 domestic infections on Monday but with testing no longer required for much of the population, the number is believed to be much higher.

As the country is finding a difficult path from a Covid-free policy to living with the virus, many people with symptoms have chosen to self-treat at home.

Cold and fever medicines have sold out in most pharmacies across Beijing, and rapid antigen tests are dwindling as people stock up in anticipation of an outbreak of the virus that threatens millions of lives. unvaccinated elderly.

Social media users have reported an increase in infections in smaller cities including Baoding in Hebei province and Dazhou in Sichuan, with hospitals flooded and residents unable to buy medicine. .

AFP was unable to immediately verify the claims.

“This is really serious, the drug supply is not enough and it is badly managed,” wrote one person on the similar Twitter platform Weibo.

In a major move towards lifting tough, years-long restrictions, China said on Monday that it would remove an app used to track travel to epidemic-hit areas. sick.

The state-run “communication journey tag” is a central part of zero-Covid, tracking the movements of millions of people through their phone signal data.

It’s one of a number of tracking apps that have dominated daily life through the pandemic. Most people still use local “health codes” run by their city or province to enter shops and offices.

Social media users praised the discontinuation of the software, noting the symbolism of the government shutting down their main tracking app.

“Goodbye, this announces the end of an era, and welcomes a whole new era,” one person wrote on Weibo.

Others asked what would happen to the mountain of data collected and hoped it would be deleted.

But that normalcy means the country faces a surge of cases it is not prepared to handle, with millions of elderly people under-vaccinated and underfunded hospitals. capable of receiving a huge number of patients.

Jiao Yahui, director of the Health Department at the National Health Commission, warned last week that China has one intensive care bed per 10,000 people.

The official number of Covid cases has plummeted from an all-time high recorded last month, but top Chinese health expert Zhong Nanshan warned in state media on Sunday that the Omicron variant is “spreading rapidly”.

The easing of restrictions has also released pent-up demand for domestic travel, with state broadcaster CCTV saying on Monday that flights from Beijing’s two main airports were expected soon. back to 70% of 2019.

Video: Woman robbed with gun outside house in Ghaziabad

The stars are arranged for Lionel Messi to raise the World Cup: Zlatan Ibrahimovic EXPLAINER: Why are China’s COVID rules so strict? Dozens of Americans are being detained abroad. Here are some of their stories.