The leader’s first interview on US soil was canceled after he allegedly insisted that a female reporter was not wearing a headscarf.

CNN’s Christiane Amanpour canceled interview with Iranian President Ebrahim Raisi, claiming that he asked her to wear a headscarf in accordance with Islamic custom and that she “Politely declined.” The incident comes amid outrage and protests in Iran over the death of a young woman in police custody following her arrest. “inappropriate” hat.

Amanpour put on twitter on Thursday morning to discuss the ill-fated interview, which should have been Raisi’s first on American soil. She said the president was initially late to the engagement, and 40 minutes after it started, an aide approached her to suggest she wear a headscarf when she sat down. “Because those are the holy months of Muharram and Safar.”

“I politely declined. We are in New York, where there are no laws or traditions regarding the hijab.” Amanpour wrote, added “I pointed out that none of the previous Iranian presidents asked for this when I interviewed them outside of Iran.”


CNN continues to claim that the assistant “Make it clear that the interview wouldn’t have happened if I wasn’t wearing a hijab,” say it is a “Respect Matters” given current “The Situation in Iran” – seems to refer to recent protests about the death of 22-year-old Mahsa Amini, who was detained in Tehran for wearing a shirt “Incorrect” headscarf for her mysterious death in custody.

Amanpour said she was going to ask Raisi about the woman’s death and the heated protests that followed, but she insisted. “Can’t agree to this unprecedented and unexpected condition” involves head covering, and therefore “go far.”

Raisi’s office has yet to comment on the incident or confirm Amanpour’s version of events.

Although the hijab – the head covering commonly worn by Muslim women in various shapes and forms – has been compulsory in Iran since the country’s 1979 Islamic Revolution, Amanpour said she has interviewed every Iranian president since 1995 and has never been asked to wear a headscarf outside of Iran. However, she has worn a headscarf for some overseas interviews before, such as sit down with Afghan Interior Minister Sirajuddin Haqqani in Kabul earlier this year, where she wore a loose scarf. 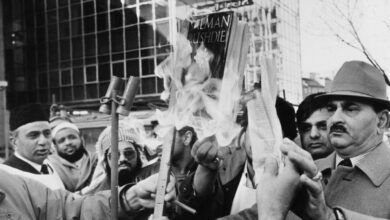