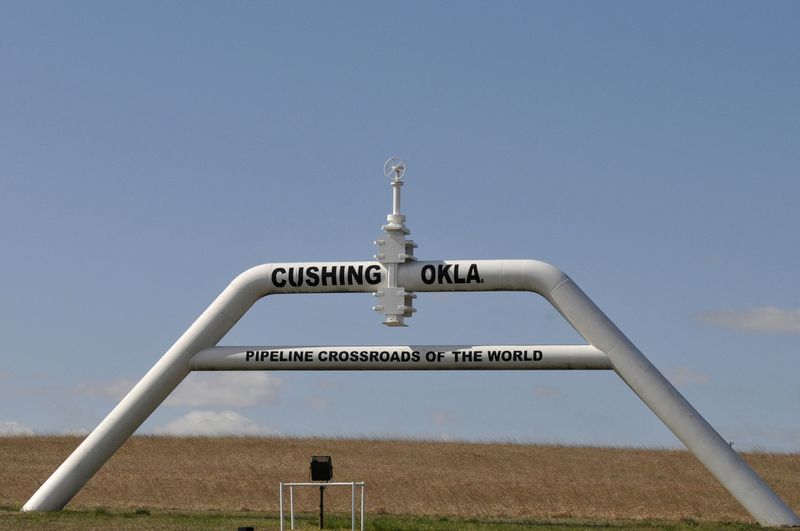 © Reuters. FILE PHOTO: A sign constructed from a pipe that reads “crossroads of the world’s pipelines” welcomes visitors to the town in Cushing, Oklahoma, March 24, 2016. REUTERS/Nick Oxford/File Photo

HOUSTON (Reuters) – An outage on the largest oil pipeline to the United States from Canada could affect inventories at a key U.S. storage hub and cut crude supplies for two refinery hub, analysts and traders said on Friday.

Although TC Energy has yet to say when it can restart the pipeline, the previous Keystone spill affected operations for two weeks.

“The main question continues to be the possible downtime… longer periods, ultimately, of course mean inventories are likely to be scarcer in Cushing or heavy in (crude) in Cushing.” Gulf Coast,” Michael Tran, managing director at RBC Capital Markets.

The line runs directly to the Cushing, Oklahoma storage hub, which is now about a third full with nearly 24 million barrels in storage.

Data analysis firm Wood Mackenzie said that if the line were closed for more than a week, it could reduce about 2.5 million barrels of inventories at Cushing.

AJ O’Donnell, director of pipeline researcher East Daley Capital, said if the outage lasts more than 10 days, it could push the Cushing storage near its operational minimum of 20 million barrels.

East Daley and Wood Mackenzie estimate that other pipelines between Canada and the United States are at or near full capacity.

Refineries in the US Midwest could be more affected depending on when lines are restarted.

The Kansas spill took place downstream from a key junction in Steele City, Nebraska, where Keystone split to run into Illinois. That segment of the chain can be restarted, but the other segment affected by the spill will not be operational again until regulators approve the restart.

In contrast, refineries on the Gulf Coast can use more crude sources, both from facilities off Louisiana and from countries like Colombia, Mexico and Ecuador.

However, volumes arriving in the Gulf from Cushing have declined. Volumes on TC Energy’s Marketlink pipeline, which flows from Cushing to Nederland, Texas, fell by about 300,000 bpd to less than 500,000 bpd, Wood Mackenzie estimated, after the leak was discovered.

That could leave Gulf Coast refineries short of barrels of Canadian heavy oil.

Meanwhile, long-term pipeline outages could lead to Canadian crude being congested in Alberta and push prices lower, although Friday’s market reaction was rather muted.

According to a Calgary-based broker, Western Canada Select (WCS), Canada’s benchmark heavy oil for December delivery last traded at a discount of $27.70 per barrel against its benchmark crude futures. of America. On Thursday, December WCS traded as low as $33.50 below , before settling at a discount around $28.45.

From Deepthi Sunaina-Shanmukh Jaswanth's break up to Revanth being blessed with a baby girl: Telugu celebs who started a new chapter in life in 2022