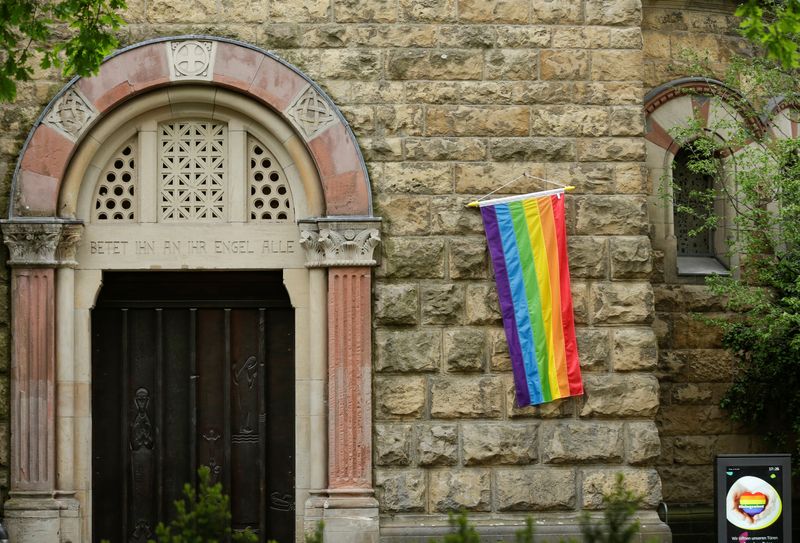 © Reuters. FILE PHOTO: A rainbow flag is seen on the wall of a Catholic church as the building opens its doors for same-sex couples to receive blessings in Cologne, Germany, May 10, 2021. REUTERS/Thilo Schmuelgen

VATICAN CITY (Reuters) – The Flemish Roman Catholic bishops on Tuesday issued a document authorizing the blessing of gay unions, directly defying a ruling against such practices by the office Vatican doctrine.

The document published on the website of the Belgian Bishops’ Conference proposed a ceremony that included a prayer and a blessing for stable gay unions. But it stressed that’s not “what the Church understands about sacramental marriage”.

It says the Church wants to be “pastoral close to homosexuals” and a “welcoming Church that excludes no one.”

The ceremony will begin with prayers and include the couple’s commitment to family and friends to be faithful to each other. It will end with more prayers and a document called “blessing”.

A Vatican spokesman was not immediately available for comment.

In March 2021, in response to official questions from several Roman Catholic dioceses about whether the practice of blessing same-sex unions was allowed, the Vatican’s doctrinal office, The Congregation for the Doctrine of the Faith (CDF), ruled that it was not.

At the time, the CDF said its ruling was “not intended as a form of unjust discrimination, but as a reminder of the truth of the liturgy” about the sacrament of marriage and blessing. healing associated with it.

In response to that ruling, Bishop John Bonny of Antwerp said he felt “embarrassed for my Church” and apologized to those he said were hurt by the “painful and incomprehensible” decision. .

Pope Francis has said he opposes same-sex marriage within the Church but supports a civil union law that gives same-sex couples legal protection and rights such as inheritance and joint health care.

The bishops’ spokesman, Geert De Kerpel, said their intentions were not to oppose the Vatican’s ruling.

“This is first and foremost a positive message,” he told Reuters, adding that it was in line with the pope’s calls for a more inclusive Church.

Documents from the Flemish bishops say that some gay Catholics remain celibate and that the Church appreciates that. The Church teaches that while homosexual orientation is not a sin, homosexual acts are.

But the document adds that “some prefer to live together as a couple, in a long and faithful union with their partner” and that such a relationship “can also be a source of peace and happiness.” to shared”.

The bishops denounced “homophobic violence” and said they wanted to “structurally cement their pastoral commitment to homosexuals”.

They announced the appointment of Willy Bombeek, a gay Catholic, as an additional staff member of their family pastoral care unit to oversee the care of gay Catholics.

A person with similar duties will be appointed for each diocese in Flanders, the Dutch-speaking part of Belgium.

“I am proud to belong to the Flemish Church,” Bombeek told Reuters. “I hope that believers in other countries will experience this as well, and hopefully, this is just the beginning.”

Francis DeBernardo, executive director of the US-based LGBTQ Catholic group, Ministry of New Ways, said the move would be a blessing for both the couple and for the Church.

“These prelates recognize that love is love. Love is more important than sexual behavior, and love is something the Church should always bless,” he said in a statement.

The first spring carnival is due