British doctors have made a breakthrough that could finally pave the way for a national ovarian cancer screening programme.

Researchers have found that women who are at risk of developing the deadly disease have high levels of a specific protein in their bodies.

Based on this, the Oxford University team is now developing a test that could be offered every five years to women over 45.

Women at higher risk, such as those with a family history of ovarian cancer or those with high-risk gene mutations, may be screened every two years.

Dr Mara Artibani, an Oxford oncologist who is working on the study, said: ‘This could be the magic bullet for early ovarian cancer detection. 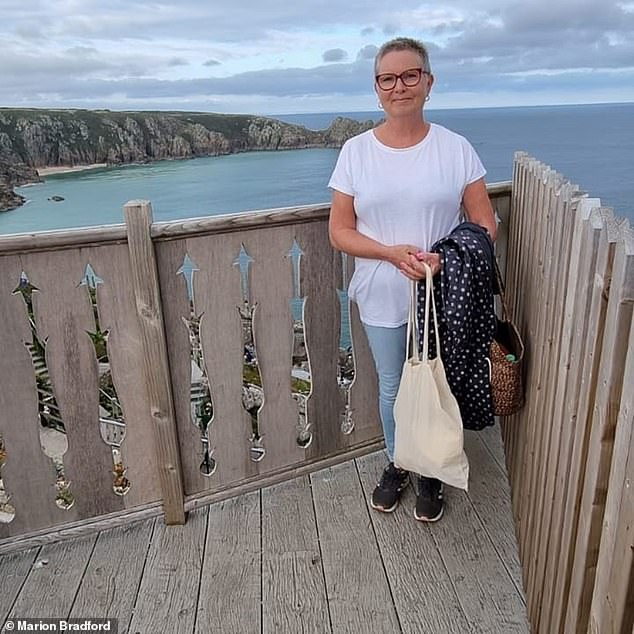 British doctors have made a breakthrough that could finally pave the way for a national ovarian cancer screening programme. One patient who would benefit from the screening is Marion Bradford, 57, from Surrey, who was diagnosed with ovarian cancer in November 2017

The protein, called SOX2, is produced in the fallopian tubes in high levels if a woman is in the early stages of ovarian cancer.

Researchers are trying to find out if a blood test, or a swab similar to a smear test, would be the best way to detect it.

Almost 7,000 women are diagnosed with ovarian cancer each year in the UK. Less than half survived more than five years. More than 4,000 people die from the disease every year.

The outlook is bleak as early symptoms – such as bloating, loss of appetite, and needing to go to the bathroom more often – are often mistaken for other health problems, so cases are often not detected until later. Cancer has spread throughout the body.

The risk of developing ovarian cancer increases sharply from about age 45, and is more common in women with a family history of the disease. Even so, creating a screening test to detect cancer in its early stages has put doctors off.

Last year, hopes were dashed when a large ovarian cancer screening trial failed to produce results. It involves giving women an annual blood test to look for another protein linked to ovarian cancer, called CA125, and an ultrasound. 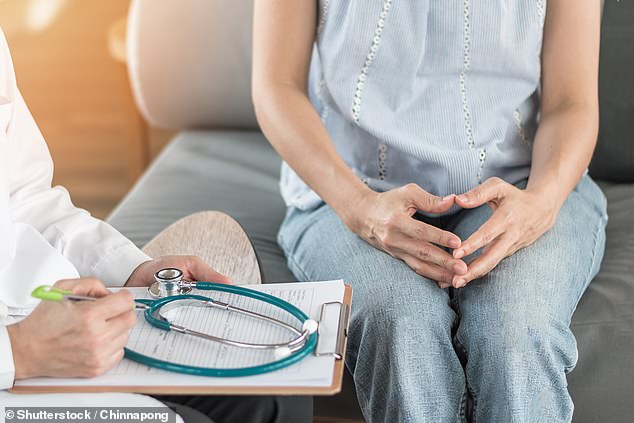 Women at higher risk of the disease, such as those with a family history of ovarian cancer or those with high-risk gene mutations, can be screened every two years (stock image) )

It showed 40% more cancer cases than current methods – which wait to check on women when they see a doctor with concerns about symptoms – but it did not lead to a reduction in deaths because of the severity of the disease. High CA125 is only produced as the cancer progresses.

By comparison, SOX2, the protein discovered by the Oxford team, is an accurate marker of the disease, even in its earliest stages.

As SOX2 is only found on the fallopian tubes, the test under development hopes to identify an undiscovered chemical ‘by-product’ that binds to the protein visible in the blood or on the lining of the uterus. bow.

Once it is identified, scientists can begin testing a screening tool for it.

‘If this by-product is found in the blood, we will design a blood test; and if it’s on the lining of the uterus, we can make a smear test,’ says Dr Artibani.

She added that, given SOX2’s accuracy in predicting cancer, the test would only be done for women over 45 every five years, or every two years for those at high risk.

But for the test to be rolled out within the next decade, charities say more funding is needed.

One in five ovarian cancer cases has a genetic cause – and in most of these cases, an immediate family member will develop the disease.

Cary Wakefield, of Ovarian Cancer Action, said: “Ovarian cancer research requires more investment if we are to have any hope of developing an effective screening tool for early detection of the disease.

One patient who would benefit from the screening is Marion Bradford, 57, of Surrey, who was diagnosed with ovarian cancer in November 2017.

The former teaching assistant started feeling bloated and tired in 2016 and had severe stomach pain a few months before being diagnosed.

Her concerns were initially dismissed by her doctor because she did not fit the typical description of an ovarian cancer patient.

She said: ‘I was told I was too young and I didn’t have anyone in my family with this, so the doctors said it was really unlikely to be cancer. “

But as the pain increased, Marion asked for another appointment and was eventually able to go for an ultrasound, and a few weeks later a biopsy.

‘When I went to get the results, a Macmillan nurse was waiting for the doctor. I was told that the cancer had spread, and that I needed to start chemotherapy immediately. ‘

The mother-of-three underwent two rounds of chemotherapy, following a relapse in 2020, and she is still on medication.

She believes a screening test will save her years of treatment. “I never realized something was wrong until it got really serious,” she said.

‘Before my hysterectomy, I went for cervical cancer screenings and annual mammograms to look for breast cancer.

‘Why isn’t there a way to do the same for ovarian cancer?’

Hospital patients who are trapped in breathing tubes and unable to talk may soon be able to communicate using a lip-reading app on their phones.

The technology is being tested at Lancashire Teaching Hospital NHS Trust on patients who have had a tracheostomy – where a tube is inserted into the windpipe and a machine helps them breathe.

One in six people admitted to the NHS intensive care unit undergo a tracheostomy.

Many of these patients are suffering from respiratory illnesses, such as Covid, that make it difficult to breathe, as well as other serious conditions, including certain cancers or head injuries.

Patients can spend anything from a few days to a few months connected to the tube. But while this is often a life-saving intervention, the patient cannot use her vocal cords, making communication difficult.

According to Dr. Shondipon Laha, an intensive care consultant who came up with the idea for the app and is leading the trial, tracheostomy can isolate patients and affect their care. surname.

He said: ‘Patients may need the restroom, be in pain or have a special concern they want to raise, but they are unable to communicate this to a doctor or visiting relative, which could be meaningless. equally resentful.’

Advanced technology hopes to remedy this.

To use the app, the patient points the smartphone camera at their face. Sophisticated software reads their lips as they speak, which is then displayed on the phone’s screen for doctors and visitors to read.

The app, designed by Northern Ireland-based software company Liopa, now recognizes 40 phrases, such as ‘I need the toilet’, ‘I want to talk to my family’ or ‘I’ feeling sad’.

It hopes to expand the number of phrases the app understands and also make it possible to speak the patient’s words.

Dr. Laha first got the idea for this app during the 2018 Football World Cup.

He said: ‘I was in the examination ward and there was a patient who had a tracheotomy and shoved me very hard in the back. He was trying to watch a penalty shootout and I got in the way.

‘Then I realized that it would be helpful to have something that could help these patients talk.’

Trials conducted on 12 patients at the hospital in 2019 showed effectiveness and were widely applied.

Dr Laha added: ‘If this goes well we could extend it to other NHS trusts across the country.’

Israel strikes positions in Syria | News of the war of Syria Company says Moderna Booster may run out in 6 months