You’re not alone: ​​The billionaire’s behavior has led some to publicly declare (on Twitter, of course) that they will never buy one of his electric cars. And a poll of Twitter users indicated that most wanted him to step down as CEO of this social network.

Tesla is still the world’s top electric vehicle maker, but China’s BYD is catching up. Tesla took an early leap in the industry with the launch of the first vehicle it had developed from scratch in 2012, the Model S, prompting the public to rethink what EVs could offer with a sleek look. , versatile performance and a more premium finish.

But recent strong entries from established brands, as well as heavily advertised launches from other startups, are capturing a larger share of the burgeoning electric vehicle market.

A market research brand, HundredX, has shown a drop in loyalty in recent months among Tesla owners, who are known for their devotion to the corporate leader and his brand.

However, are you still curious about electric vehicles and considering switching to electric vehicles? Perhaps you respect Musk but care about what else is in the market. Or maybe you don’t have strong feelings about Musk — but you don’t love Teslas and are hoping to find something that better suits your personal needs.

Here, we break down each model in Tesla’s lineup and the alternatives available.

BMW’s entry into the luxury electric vehicle space comes with the stunning i4. Our review noted the tight steering, responsive suspension and powerful engine, as well as the high-quality interior that BMW is known for. The rear-wheel drive model, the i4 eDrive40, has a 300-mile range and starts at $55,900. The i4 M50 accelerates from 0-60 in 3.7 seconds, has a range of 245 miles and starts at $67,300. “It is impossible to replicate more than a century of German production in the span of several years; the fit and finish of the interior cabin in electric vehicles from Audi, Porsche and now BMW is one way it shows up,” says our i4 review.

Meanwhile, the Polestar 2’s looks and build quality are better than the Tesla’s, with comparable performance and 270-mile range. Dual motors start at $53,300. The Kia EV6 crossover, which starts at $48,500, has a range of 310 miles and twice as much cargo space as the Tesla sedan.

Instead of: Model Y

While it doesn’t quite look like a station wagon, the Model Y serves that purpose in the fleet. It’s like a downsized Model X, but it still has more cargo space than sedans—or, it can be configured to seat seven. 4.8 seconds.

Starting at $49,800, the Audi Q4 e-Tron Premium has a range of 265 miles and accelerates from 0-100 km/h in 5.8 seconds. Its interior and build quality feel on par with BMW and superior to Tesla. Meanwhile, the BMW iX starts at $83,200, has a range of more than 300 miles and accelerates from 0-100 km / h in 4.6 seconds. Our review found it unattractive and a bit boring to drive but said it was as high-quality as expected from BMW.

Instead of: Model X

This Porsche scooter really drives like a Porsche. Its acceleration is smooth and flawless, the steering feel starts immediately, and the thrilling performance can be achieved at any speed. The range is only about 235 miles and the price starts at $97,700, but it has some great off-road power and makes for a very enjoyable way to get your groceries home.

Instead of: Model WILL

This luxury sedan from Tesla is fast, especially if you buy the extra power-up model that gets it to 60 mph in less than 3 seconds. The dual-engine model starts at $104,990, has a range of 405 miles and accelerates from 0-60 in 3.1 seconds.

For $104,400, you get the most technologically advanced car Mercedes-Benz has ever offered to the public. The EQS takes on tight turns and has an amazing driving range of 485 miles. There are also luxury amenities like Burmester 3D surround sound. The sleek, spacious interior, HEPA air filter and front seats heat quickly and provide massage services that make the interior feel like a wellness spa. Highlights include the car’s look — it’s reminiscent of a candy bar — and the lack of drag when pushing the car to brake. 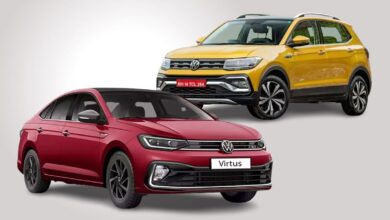 Virtus, Taigun prices will increase when Volkswagen announces price increases from this date Royal Enfield Hunter 350 to launch in India on August 22