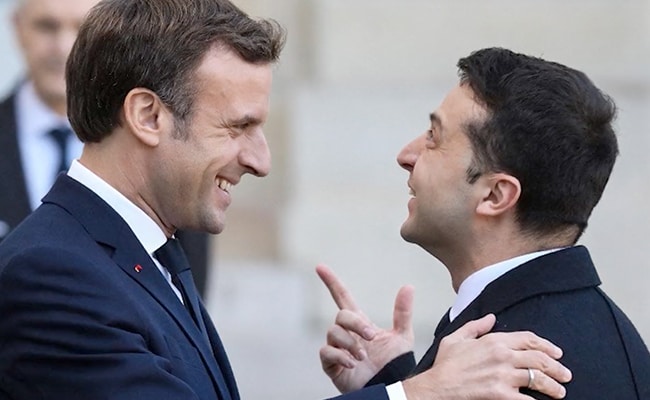 The rally of politicians, blue-chip companies and aid agencies comes after fresh comments about the war from French President Emmanuel Macron put him at odds with many in Ukraine.

Macron called for providing “security guarantees” to Russia when the war ended in a December 3 interview, drawing criticism from some Ukrainian and Eastern European politicians.

A call between the French leader and his Ukrainian counterpart Volodymyr Zelensky on Sunday cleared the air and saw the men discuss Tuesday’s conference.

Macron “reminded President Zelensky that Ukraine can count on French support for as long as necessary to fully re-establish national sovereignty and integrity,” according to the French president’s office.

Both men will speak during the first part of the conference, called “In solidarity with the Ukrainian people” – Macron in person and Zelensky via video link.

The event will focus on ways that Ukraine’s Western allies can provide immediate assistance to keep the country’s civilian infrastructure running amid relentless bombing from Russia.

Moscow has changed tactics since October when it began air strikes against Ukraine’s energy grid in particular, plunging millions into the cold and darkness with the onset of winter.

According to Ukrainian authorities, another 1.5 million people lost power in southern Odessa over the weekend following the drone attacks.

“Our immediate goal is to ensure that Ukraine’s network does not go down and lead to power outages for several weeks,” a Macron aide told journalists last Friday. “This is about urgent help.”

French organizers have stressed that this conference is different from other recent international gatherings in Lugano, Warsaw or Berlin dedicated to lasting reconstruction.

Instead, they hope sponsors will commit to helping from technical expertise to spare parts to carry out repairs.

Another key outcome will be a new platform, agreed by G7 leaders on Monday, that will allow donors to see Ukraine’s needs and coordinate their aid.

Mr Macron’s office said Western military aid is currently being coordinated in this way, but no kind of civilian assistance exists.

“The goal now is to build this platform quickly with the participation of Ukraine, international financial institutions and other partners,” German Chancellor Olaf Scholz said after the leaders of the The rich nations club held online talks on Monday.

Ukrainian Prime Minister Denys Shmyhal and Zelensky’s wife, Olena, are both expected to be in Paris.

The second part of the event, called the “Franco-Ukrainian Conference on Resilience and Reconstruction”, will see 500 French companies gather to discuss reconstruction contracts.

Although the war is still raging, Western countries and companies have their eyes on deals expected to be worth tens of billions of euros.

“The Ukrainians want us to talk about reconstruction. There are already areas that have been evacuated by the Russian military and are ready to discuss reconstruction,” the French official said.

The French economy ministry has prepared a range of tools to encourage its companies, from insurance to export guarantees.

Macron’s comments about ensuring Russia’s security have led to accusations that he is refocusing on diplomatic compromises with Russian President Vladimir Putin.

Critics say it’s too early to discuss deals with Putin and that Western leaders should focus exclusively on helping Ukraine push back against Russia’s occupation.

Macron has angered Ukrainian allies in the past, most notably in June when he said “we must not humiliate Russia”.

The 44-year-old French leader initially tried to act as a mediator between Ukraine and Russia, holding lengthy talks with Putin and Zelensky shortly before the Moscow attack.

Macron’s office has dismissed any hint of tension with Zelensky.

“There’s a gap between what some people say by putting part of a sentence out of context and the reality of the work we’re doing, which is going well,” the aide said.

“The dialogue between the president (Macron) and President Zelensky was amazing.”

Indian and Chinese armies Clash in Arunachal, “Small wounds” on both sides

South Korea said to coordinate with the US, Japan to sanction North Korea