Attorney General Merrick Garland and his Ukrainian counterpart, Andriy Kostin, signed an agreement on Tuesday to formalize cooperation on joint efforts to prosecute alleged war crimes by Russian forces in the Middle East. war in Ukraine.

The two signed a memorandum of understanding following a meeting at the Department of Justice headquarters in Washington, a demonstration of a partnership aimed at increasing international pressure amid newly discovered evidence of mass atrocities. after Ukrainian forces recaptured much of the territory in recent weeks.

Ukrainian authorities say they are investigating a mass grave with more than 400 agencies was found in Izyum, where Russian forces terrorized the inhabitants during the six-month occupation. Ukrainian President Volodymyr Zelensky in the spring said a previous massacre of civilians in Bucha up to “genocide.”

Garland said the deal would build on the work of a war crime accountability group he announced in June after a visit to Ukraine and meeting with local authorities. That team, led by Eli Rosenbaum, a 36-year veteran of the Department of Justice, is tasked with providing technical and legal assistance to Ukrainian officials, including help with evidence collection and analysis. forensic medicine.

“America and the world have witnessed horrifying images and heartbreaking accounts of the brutality and death perpetrated by Russia’s unjust invasion of Ukraine,” Garland said at the signing event. . “During our last meeting, I reiterated the Department of Justice’s commitment to stand with the Ukrainian people in the face of those horrors.”

Kostin has held meetings in Washington to strengthen the urgency of holding Russia accountable for its atrocities. During an appearance on CBS News’ “Meet the Press” on Sunday, he said Ukrainian authorities had recorded 34,000 war crimes.

At the Justice Department, Kostin said he received a tip, just two hours before meeting Garland, of new atrocities discovered in Kharkiv, where another grave with 100 bodies was found.

“This evil should be fought and defeated by joint efforts,” he said. “International war criminals must be held accountable.” 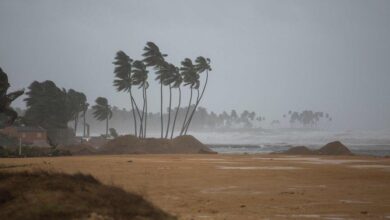