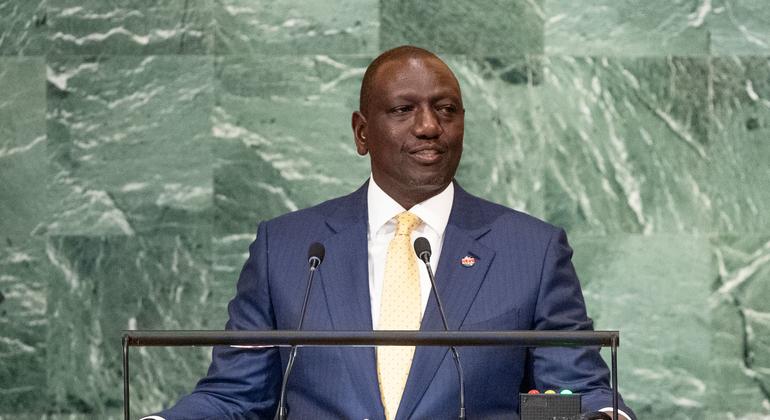 Ruto warned that rising nationalism is undermining collective action and the international community’s ability to guarantee fundamental rights. Thus, he argues, countries in the Global South are calling for global governance to become more democratic and inclusive, as they strive to get their economies on track.

Build back better, from the bottom

Referring to the heard phrase “Building Better Again”, Mr. Ruto added a new clause, calling for the global economic recovery to happen from the bottom up, by bringing the majority of disadvantaged workers. into the economic mainstream.

“Billionaires at the bottom,” he says, “relentlessly wage their daily battle for survival in a crowded arena characterized by a scarcity of opportunities and a generally precarious existence.”

He went on to praise the “hustlers” who survived the overwhelming odds, and called for action to make them mainstream.

Response to drought and famine

Turning to the climate crisis, Mr. Ruto noted that drought and heatwaves in Kenya, on a scale not seen in decades, have forced the country to focus more on hunger relief, support education, social protection and health systems. . 3.1 million people in the country are being food insecure, he said, because of increasingly scarce water and rising food prices.

Mr. Ruto recounted that the Stockholm + 50 meeting, on the anniversary of the first United Nations conference on the human environment in 1972, was co-hosted by Kenya.

The Kenyan president noted that, at that international meeting, there was consensus among countries on the need for urgent action to address environmental impacts, yet “very little progress has been made.” set of necessary actions”.
He said Kenya is responding to the climate emergency by investing in climate-resilient agriculture, as part of a 10-year strategy for growth in the agricultural sector, which will “continues to hold the key to creating equitable and sustainable growth” for the people of Kenya.

This sector, like others including education and health, is increasingly reliant on digital access, said Mr. Ruto, offering “a possible shortcut to eradicating poverty and promoting development.” comprehensive development”.

The President called for stronger global partners to strengthen ICT (information and communications technology) infrastructure in developing countries, in order to bridge the digital divide between the Global South and the rest of the world.

The Ocean and Blue Economy, the President declared, remains a development priority for Kenya, in the belief that significantly increased investment can end hunger, reduce poverty, create jobs and boost economic growth economic.

He reports that Kenya is reviewing its National Green Economy Strategy to strengthen community structures – in participatory management of freshwater, coastal, marine and ecosystem resources – and invite development partners to invest in Africa to build capacity for sustainable use of marine resources.

Towards a national vision of the future

Over the past decade, Mr. Ruto said, Kenya has implemented National Vision 2030, a blueprint to transform the country into a “newly industrialized, high-middle-income country that delivers quality high standard of living for all its people in a clean and safe environment by 2030”.

Mr. Ruto went on to point out that support will be needed from the international community, without Kenya’s support Kenya risks losing its development achievements. He demanded more liquidity and a better “fiscal space” to enable Kenya to increase social investment, support climate change adaptation and mitigation, address security needs and address development finance challenges.

In addition, the President joined other leaders in calling on multilateral lenders to extend pandemic-related debt relief to the hardest-hit counties, particularly those impacted by the pandemic. devastating combination of conflict, climate change and COVID-19. He also urged the G20 group of leading economies to suspend or extend the repayment period of middle-income countries during the pandemic recovery.

Speaking as the leader of a country that is a non-permanent member of the Security CouncilMr. Ruto stated that Kenya has continued to advocate for closer cooperation between regional mechanisms and the Security Council as an effective means of achieving international peace and security.

“We are committed to finding a stronger African voice in the Council and achieving a consensus-driven, rules-based multilateral system,” he said.

However, he also noted that the Security Council needs to be reformed to make it more democratic: “given the scale and many challenges the world continues to face, a more relevant United Nations is needed. necessary, possessing legitimacy and effectiveness in dealing with threats to international peace and security”.

Mr. Ruto went on to lament the failures of multilateralism, regarding Africa, remarking that the last time Africa was at the center of a strong and effective multilateral consensus was during the Berlin Conference. 1884-1885. [which led to imperial European powers effectively divided up much of Africa between them].

“We have an urgent moral duty to do better,” he continued, “and correct this mistake.”
However, the President concluded that strengthening multilateralism is the only sustainable path to a world of peace, stability and prosperity for all.

“This is the imperative of our times,” he declared, “and the call of the moment. It is time to address the trust deficit with the firmer belief that none of us are truly safe until we are all safe.”