Byzantine mosaics dating from the 5th to 7th centuries were unveiled in central Gaza on Friday.

Farmer Salman al-Nabahin excavated the ruins six months ago while working in his olive grove in the Bureij refugee camp. He then spent three months excavating it with the help of his son.

The mosaic floor, boasting 17 symbols of animals and birds, is well preserved and brightly colored.

René Elter, an archaeologist from the Jerusalem School of Biblical and Archeology who examined the find, told The Associated Press.

Elter estimates the mosaic floor dates from the 5th to 7th centuries but told the AP that proper excavation is needed to determine exactly when it was built and whether it was part of a religious complex. or secular.

He was unable to access the website but did see photos and videos taken by local research partners.

The mosaics are the latest in a series of Byzantine archaeological finds in Gaza in recent years.

In January, the remains of a 5th-century church were inaugurated in Jabaliya, in the northern Gaza Strip, after a three-year restoration project.

The Gaza Strip, a Palestinian coastal enclave between Israel and Egypt, was a busy trade route between Egypt and the Levant in ancient times. The coastal strip is full of remnants of ancient civilizations, from the Bronze Age to the Islamic and Ottoman eras.

The Gaza Strip has blockaded by Israel since 2007resulted in half of the population of two million living in poverty today and an unemployment rate of around 45%. 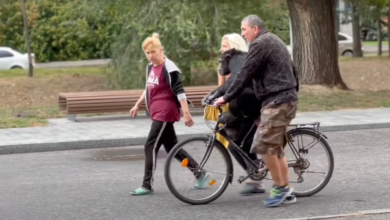 The escaped chimpanzee returned to the Ukrainian zoo on a bicycle