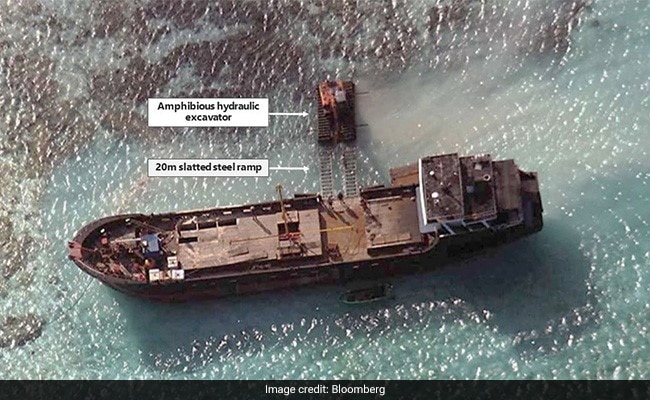 According to Western officials, China is building a number of bare land features in the South China Sea, an unprecedented move they say is part of Beijing’s long-standing effort to bolster its claims to the South China Sea. disputed territory in an area important to global trade.

While China has previously built disputed reefs, islands and land in areas it has long controlled – and militarized them with ports, airstrips and other infrastructure – Officials have released images of what they call the first known case of a country doing so in territory it has not yet occupied. They warn that Beijing’s latest construction shows an attempt to promote a new status quo, although it is too early to tell if China will seek to militarize them.

Fishing fleets operating as de facto maritime militias under Beijing’s control have carried out construction activities on four uninhabited features in the Spratlys over the past decade. , according to unnamed officials to discuss sensitive information. They said some dunes and other formations in the area have expanded in size more than 10 times in recent years.

Satellite photos shared with Bloomberg News depict what they say is a Chinese naval vessel unloading an amphibious hydraulic excavator used in land reclamation projects at Eldad Reef just north of the School Sa in 2014. Since then, new lands have appeared on the water over the past year, officials say the images show large pits, piles of debris and excavator tracks at one site. previously only partially exposed during high tide. 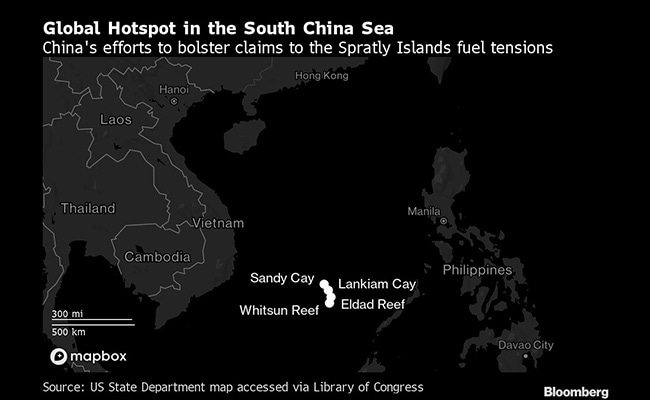 They said similar operations have taken place at Lankiam Cay, known as Panata Island in the Philippines, where a feature was fortified with a new enclosing wall in just a few months last year. Other images they present show physical changes at both Whitsun Reef and Sandy Cay, where previously submerged features are now fixed above the high-tide line.

When asked to respond to the statements, China’s Foreign Ministry in Beijing said: “The relevant report was completely made out of nowhere.”

An image of a Chinese maritime militia ship unloading from an excavator at Eldad Reef in 2014 in satellite images obtained by Bloomberg News.

China’s claim to more than 80% of the South China Sea is based on a 1947 map showing vague markings from which it has come to be known as the “nine-dash line”. They have previously said that they have a sovereign right to build on their territory.

Tensions between China and other claimants in the South China Sea – the Philippines, Taiwan, Malaysia, Indonesia, Vietnam and Brunei – have increased for years as Beijing invests more in naval and defense vessels coast to enforce its claims. The Spratly Islands, which were historically small and uninhabited, have taken on greater geopolitical significance as they lie on one of the world’s busiest shipping lanes and may have military significance. , especially if tensions over Taiwan cause a regional war.

China’s actions have prompted other countries in the region to step up defense spending and also undertake reclamation work. According to a report this month by the Asia Maritime Transparency Initiative, Vietnam has expanded its dredging and backfilling operations at several outposts in the Spratlys this year.

The Philippines this month protested against Chinese ships besieging two reefs near Reed Bank, a disputed area where both nations have discussed a joint oil and gas exploration plan. Last year, the Philippines also concentrated many ships at Whitsun Reef, located about 175 nautical miles (324 km) west of the country, after more than 200 Chinese militia ships were spotted during a similar grouping exercise. on one’s own. 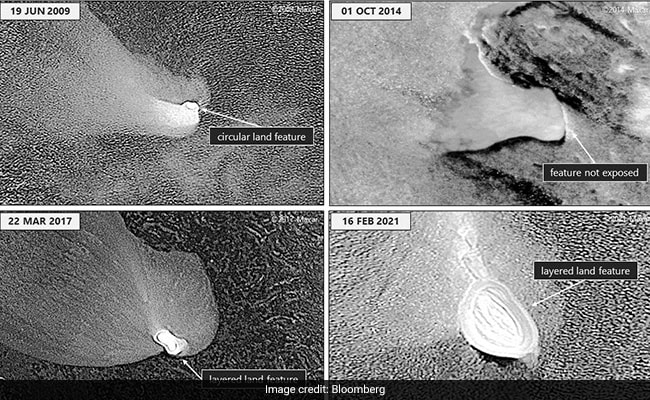 Satellite images obtained by Bloomberg News depict physical changes to a multi-layered land feature at Sandy Cay between 2009 and 2021.

Long before the recent rise in tensions, Beijing signed a non-binding “declaration of conduct” with Southeast Asian nations in 2002 calling on all parties to refrain from “living on the islands, reefs, shoals, shoals and other features are currently uninhabited”.

In 2016, a United Nations-backed international court ruled in a case brought by the Philippines that China’s claims had no legal basis. China rejected the ruling, saying it had no jurisdiction, and continued to send thousands of “fishing” boats to the disputed features.

The United States has repeatedly criticized China’s actions in the South China Sea and sought to challenge its territorial claims with so-called freedom of navigation operations.

US Defense Secretary Lloyd Austin said this month that the US is building a more dangerous force posture in the Indo-Pacific as part of an effort to ensure China does not dominate the region. .

He said on December 3 that China is “the only country with both the will and growing power to reshape the region and the international order to suit its authoritarian priorities. let that happen.”