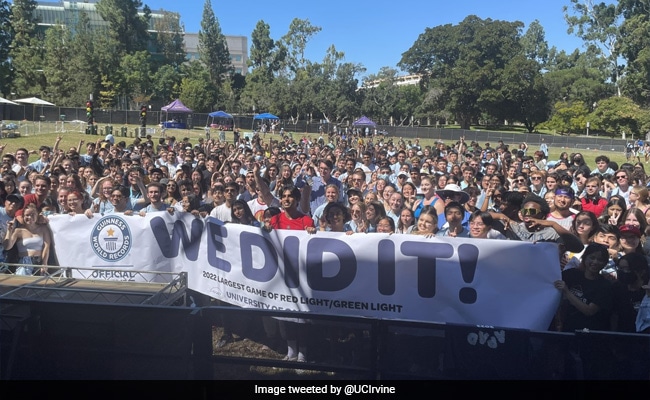 A Guinness World Record judge was present at the event

More than 1415 students at the University of California Irvine (UC Irvine) participated in the largest red and green light game and broke the Guinness World Record. The students played the classic Korean childhood drama on Wednesday at Aldrich Park. The popular children’s game is often called Statue and there are variations of the game throughout different regions of the world.

The game Red Light, Green Light has become a global craze after its famous debut in the Korean drama Squid Game, which is streaming on Netflix. From memes to pop culture references, the game’s sudden resurgence is undeniable. Now, UCI has hosted the Red Light, Green Light competition as part of the Welcome Week tradition and broke the Guinness World Record for the maximum number of students playing the game together, which speaks volumes. much about the popularity of the game.

A Guinness judge present at the event verified that UCI had broken the previous record set by 1203 participants at Oregon’s Willamette University in 2015.

🚦💙💛🐜🍽 Anteaters have done it again! With a crowd of 1,415 UCI broke the Guinness World Record title for the Largest Red/Blue Light game. #UCIWelcomepic.twitter.com/PYwKgp8i5O

“I think [red light,green light] created a really big resurgence thanks to “The Ink Game”, I won’t lie,” said Semaan. LA times. “A lot of us, when we were kids, used to play that game. So, in the spirit of having something that everyone knows how to play, we chose the red/green light… It’s really rewarding to see so many people showing off their school spirit.”

“I know it’s a bit difficult and UCI isn’t particularly known for its school spirit, but I think this year is really different. I see a lot of people this year who are really willing to let go of the ‘Oh, I’m too cool for this’ notion and just really have fun and play the game,” added Semaan.