Vastness is a defining feature of the Chinese Communist Party (CCP).

It has more than 96 million members, and the party’s official list of heroes and martyrs counts two million names of those remembered for their storied lives and heroic deaths.

In the expansiveness of the CCP’s political structure, just a tiny few have completed the long march to the party’s upper echelons.

And among those who have reached the pinnacles of the party’s hierarchy, just four names have been anointed as the party’s “core” leaders: Mao Zedong, Deng Xiaoping, Jiang Zemin and the most recent addition, President Xi Jinping.

Some also argue that only Mao, Deng, and Xi deserve to be considered as truly ‘great’ leaders as Jiang’s “core” status was bequeathed rather than earned.

This week’s highly choreographed event in the Great Hall of the People in Beijing is not only about naming Xi president for an unprecedented third term, but also recognising him as the party’s strongest leader since Mao, who ruled for 27 years until his death in 1976.

“Everybody is silent,” said Xuezhi Guo, author of The Politics of the Core Leader in China.

“There is almost no opposition — checks and balances — in the party leadership anymore,” Guo, a professor of political science at Guilford College in the United States, told Al Jazeera.

“The entire atmosphere in China now is anybody talks about or discusses about the negatives of Xi Jinping would have … trouble today. You see, that’s the problem,” he said.

While the title might sound obscure, Xi’s recognition by the party as its “core” leader is testimony to his “profound” relationships with current party members, party veterans, and the powerful military, Guo said.

Mao, Deng and Xi achieved their “core” leadership status through a recognition by party members that they had become central to the party’s functioning and, by extension, to the fate of China and its people, Guo explains.

Xi will undoubtedly be named president for a third term, Guo added, and this “time he’s much more stronger, much more powerful”.

And herein lies the danger for China’s most dominant leader in decades.

None dare challenge or criticise Xi, Guo explains, describing an atmosphere in the party that has becomes so inwardly policed in support of Xi that it could “create what we call arbitrary rule”.

As Xi moves into his third term and surrounds himself with younger, hand-picked teams of loyal officials, that silence will only deepen, he said, as none among them will dare question the man they know is responsible for their positions.

The comparisons made between Mao and Xi should offer lessons, Guo said.

“Mao made a mistake in the Great Leap Forward. There was nobody who was able to convince him. Nobody was able to challenge [him] at that time.”

Mao led the Communists to victory in the civil war in 1949 and is considered the party’s “first generation” core leader. A giant portrait of Mao dressed in his signature suit still hangs above Tiananmen Gate in the heart of Beijing.

Author Frederick Teiwes says Mao, known as the Great Helmsman, did no less than “reshape” China.

As Teiwes argues in “Politics at the ‘Core’”, Mao was a visionary, a revolutionary, and to those closest to him, an omnipotent ’emperor’ whose every word “was always obeyed even when he launched initiatives profoundly destructive of individual, organisational and national interests”.

Mao rose to become the “unquestioned leader of almost a quarter of mankind” and wielded power comparable only with the strongest of Chinese emperors, according to biographer Philip Short.

In a single generation under Mao, Short tells how China underwent changes that had taken centuries to accomplish in the West, making the ‘Great Leap’ from a feudal society that had been left largely unchanged for centuries to a socialist state, and from being bullied and plundered by Imperialist powers to becoming a Great Power itself with atomic bombs and a seat on the UN Security Council.

But, Mao was a “flawed colossus” who brought the CCP to power but also unleashed bloody purges and disastrous agricultural and economic policies.

From the famine fuelled by the Great Leap Forward to the violence of the Cultural Revolution, the victims of Mao’s policies in terms of numbers “have been exceeded only once – by all the dead of the Second World War”, Short writes.

“[H]is rule brought about the deaths of more of his own people than any other leader in history”, he adds.

In the aftermath of the Mao era, China was ready to make a new start and so were some of the party’s leadership. They had had enough of revolution and wanted stability and prosperity.

Deng Xiaoping emerged out of this more pragmatic generation.

Purged during the Cultural Revolution — and for a second time in the mid-1970s — Deng survived his denunciation, and his political rehabilitation eventually culminated in his emergence in 1978 as a paramount leader and heir to the “core” leader title.

“A pragmatist,” Teiwes writes of Deng, who would become the “grand architect” of China’s reform and had the political muscle to move the country towards “the general direction of marketisation and openness” to the world.

With Jiang’s credentials for greatness questioned and Hu skipped over for consideration, it was in 2016 when Xi was anointed as the party’s core leader — four years after rising to lead the party at a time of existential threat to its survival.

‘Looking for the strong leader’

“Corruption … all the bureaucrats, at every level”, Guo said, describing the situation when Xi was appointed party leader in 2012 and the sense among party members that the “collapse of the regime” was possible unless someone took charge.

“The entire leadership, including incumbent and retired leaders, were looking for the strong leader. And, like Mao, would function and work like a patriarch,” he said.

It was Xi who emerged to fill that role.

Xi’s anti-corruption campaign is still continuing a decade after it started, and more than 1.5 million officials have faced punishment for their misdeeds. The focus of investigations have also conveniently fallen most heavily on Xi’s political rivals, which has further advanced Xi’s power.

The drive to root out “tigers and flies” — the high-ranking and rank-and-file officials guilty of corruption — has won public support the likes of which the party has rarely seen.

On the economic front, Xi launched the Belt and Road Initiative (BRI) — China’s global infrastructure development strategy that will see Beijing invest in almost 150 countries and projects that link Central Asia with South Asia, Southeast Asia, and as far as Africa.

Often overlooked in Xi’s accomplishments is his campaign to eliminate extreme poverty. The removal of some 60 million people from extreme poverty during his 10 years in power has also added to his public support, Guo said.

However, in his stated quest to restore China’s greatness, Xi has made missteps, scholars say.

Sheena Chestnut Greitens, director of the Asia Policy Program at the University of Texas at Austin, and Jeane Kirkpatrick, fellow at the American Enterprise Institute, said Xi’s elevation to a status equalling Mao and Deng has been a decade-long project.

“In the CCP’s narrative, if Mao’s legacy is the revolution itself, and Deng’s is reform and opening, then Xi’s is ‘national rejuvenation’”, Greitens told Al Jazeera.

But there are few benchmarks to quantify the success of Xi’s “national rejuvenation”, Greitens says, and his legacy will not only depend on what he does but also on how the world perceives the policies pursued to rejuvenate China.

The promise to bring self-governing Taiwan under the People’s Republic of China — by force if necessary — is one example of what might make national rejuvenation a relative value.

As he begins his third term, Greitens says Xi has significant challenges to confront in terms of a slowing economy and Beijing’s plan to implement a recently floated Global Security Initiative, which seeks to position China at the centre of a new international security architecture outside existing structures.

The challenge for Xi will be “implementing the Global Security Initiative in a way that actually increases China’s security rather than produces a damaging backlash,” Greitens added.

Ian Johnson, a senior fellow for China studies at the Council on Foreign Relations (CFR), also noted the economic and foreign policy challenges ahead for Xi, who during his tenure had nurtured the rise of a “wolf warrior” diplomacy that did not shy away from stating China’s explicit competition with the West.

Describing such policies as “clumsy”, Johnson said that China’s aggressive approach in the South China Sea had alienated its nearest neighbours while its “wolf warrior” diplomats had nudged countries that once saw China’s rise as benign and welcome to recalibrate their perceptions of Beijing.

Xi’s nurturing of Chinese nationalism has also led to a general feeling that the West is an enemy, and a similar hostility towards China and Chinese people is also underway in the US, Guo said.

“That kind of atmosphere promotes a lot of the hostile attitudes toward Chinese people, and not just for the Chinese Communist Party,” he said, adding that there is now almost an expectation of conflict in Asia.

One of the reasons the party has been able to remain in power for so long is its ability to change course radically, said Johnson, offering Deng introducing market liberalisation and foreign trade after the chaos of the Mao years as an example.

But Johnson does not see that flexibility in the party under Xi.

China’s inability to progress from its initially highly-successful zero-Covid strategy is a case in point. The party, he said, appears content to lock down cities despite the huge disruptions to people’s lives and the economy, and regardless of what the best science says about dealing with the pandemic.

“Ploughing on” with zero-Covid could indicate an “information deficit“, Johnson said. “Where nobody really dares to tell Xi Jinping things because he’s so powerful.”

Researching the CCP’s use of history to legitimise its rule, Johnson told how Xi has sought to link the Mao era with his own period of leadership.

“So basically there are two giants in the history of the People’s Republic of China. There is Mao and there is Xi. This is the way Xi is presenting it now,” Johnson said.

The danger with any project of self-constructed greatness is that there is little place for critical reflection. Johnson describes a potential to “lose touch with reality”.

Although Mao is Xi’s benchmark, Guo says it should be Deng that is acknowledged as leaving the most lasting and beneficial legacy for China.

“All the leaders, including Xi Jinping, still continue Deng Xiaoping’s legacy”, he added.

The CFR’s Johnson agrees that Deng set China on a radically new course and brought relative prosperity to the country.

“Now, whether Xi Jinping is that kind of transformational leader, I’m not sure,” he added.

Maher keeps an eye on other Manikato Stocks 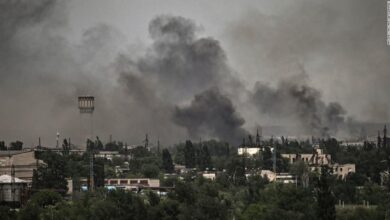 The UK Ministry of Defense said Russian air activity over the Donbas was “at a high level”, causing “significant collateral damage and civilian casualties”.