JERUSALEM – Three Israeli military commanders have been disciplined following an investigation into death of a 78-year-old Palestinian-American man who was detained, gagged and handcuffed by Israeli soldiers during a nighttime raid on his village last month.

One autopsy shows that the man, Omar Abdelmajed Assad, died of a stress-induced heart attack while he was detained by dozens of Israeli soldiers for about an hour on January 12. he exposed Israel to its closest ally, the United States, who demanded a thorough investigation.

The Israeli army’s chief of staff said in a statement released late Monday, summarizing the conclusions of the investigation by the army’s central command. “The investigation concluded that the incident was a serious and regrettable event, caused by moral breakdown and poor decision-making on the part of the soldiers,” the statement added.

The statement, in which Assad’s full name is incorrect, said the Israeli military deeply regretted his death, but stopped short of apologizing for it.

The commander of Netzah Yehuda, the radical Jewish Orthodox battalion that launched the raid on the village, will be reprimanded and platoon and company commanders will be removed from their positions. They will not serve in a commanding role for two years, according to the military.

Assad’s family and human rights groups say the punishments are inadequate and consistent with the form of punishment for Israelis who harm Palestinians.

Israel’s human rights organization, B’Tselem, has long dismissed the Israeli military’s investigations into the Palestinian killings as a whitewash.

One example of an investigation that was criticized was during the 2014 war between Israel and the Palestinian Islamist group Hamas in Gaza, when an air strike was killed four boys playing on the beach, prompting international condemnation. An Israeli army investigation did not result in criminal charges or disciplinary action against those who participated in air strikes during that war, including the two killings of the boys.

The Israeli military has called the bleaching allegations “ridiculous” and said it has repeatedly demonstrated that its investigations are independent and professional.

Mr. Assad was driving home around 3 a.m. after a night of card games and coffee at a relative’s home when he was detained near his home in the occupied West Bank village of Jiljilya. According to witnesses and his doctor, shortly after the soldiers left the scene, he was found with his face down and unresponsive with a blindfold, according to witnesses and his doctor. me, who said he died in Israel’s custody.

Initially, the Israeli military said Assad was still alive when he was released.

According to the investigation, the soldiers did not identify any signs of distress or anything worrisome about Assad’s health before they left.

But the investigation found that “soldiers failed in their duty to leave Mr Assad lying on the floor without the required treatment and without reporting the incident to their commander”.

The Palestinian Authority’s Investigative Service conducted an autopsy on Assad’s body, which is also conducting its own investigation into Assad’s death. The government administers parts of the West Bank but even in Palestinian villages like Jiljilya, Israeli forces regularly carry out raids and operate to thwart attacks.

Mr. Assad’s life and death reflected daily danger Palestinians living under Israeli occupation in the West Bank face, including the fear of being detained during night raids or of being arrested at home.

According to the investigation, soldiers were at Jiljilya that morning to prevent terrorist activities and seize weapons, and as part of that operation, they intercepted Mr. Assad’s vehicle. Mr. Assad refused to cooperate with their security checks.

In response, he was briefly detained with his hands tied and his mouth gagged, according to the investigation.

Dr Islam Abu Zaher, who tried to resuscitate Mr Assad after Israeli soldiers rushed out of the village, said his face had turned pale and had been deprived of oxygen for 15 to 20 minutes.

The center commander’s investigation found that the troops did not use violence against Mr Assad “other than at the time when Assad was arrested after refusing to cooperate”.

These findings contradict the preliminary conclusion from the Palestinian investigation, which determined that he had been “brutally beaten” and “cruel and violent treatment”.

An autopsy revealed that Assad had bruises on his head from a traumatic brain injury, but it has not been determined what may have caused those injuries. There was also internal bleeding in the eyelids from being tightly blindfolded as well as other bruises on the arms and red solder marks on the wrists from the lanyards.

Another man held by the same soldiers said that shortly after they left, he went to Mr. Assad and found him unresponsive. Dr. Abu Zaher was immediately called in and attempted to revive him with CPR and a defibrillator.

Mr. Assad had open-heart surgery and some stents implanted about four years ago, according to Dr. Abu Zaher. He is also being treated for obstructive pulmonary disease in recent months. 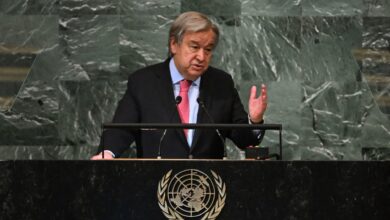 Antonio Guterres says the world is in peril 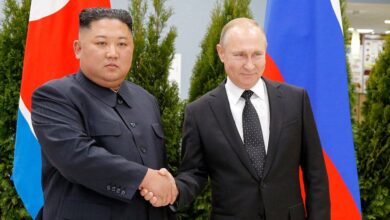 North Korea sues US for selling weapons to Russia