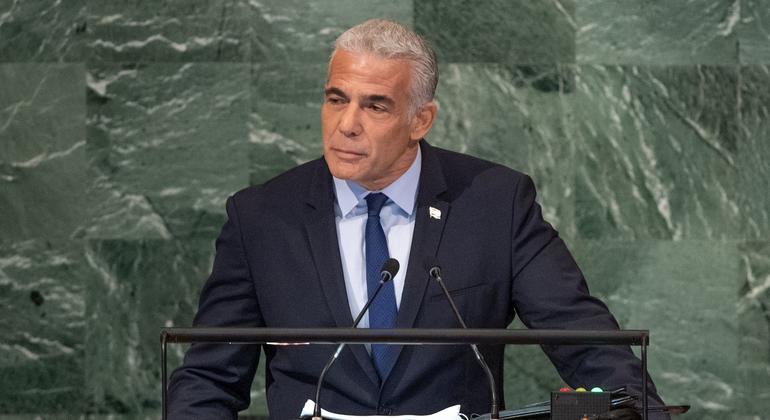 In his first speech to the United Nations General Assembly, Mr. Lapid said that despite “hostile surroundings”, Israel has become a strong and prosperous democracy because “we decided not to become a victim”.

“We have chosen not to focus on the pain of the past but on the hopes of the future… to invest our energies in building a nation…[and] a happy, optimistic and creative society,” he continued.

However, earlier this year, during the Negev Summit with the US Secretary of State, the Foreign Ministers of Egypt, the United Arab Emirates, Bahrain, Morocco and Israel, which “just two years ago, did not who could believe it could happen,” a terrorist attacked Tel Aviv.

“Right away, we all understood that the goal… was to destroy the summit…[but] Five minutes later, we issued a joint statement… condemning the attack and sanctifying life, cooperation, and we believe there is another path,” Mr. Lapid said, adding that the summit the summit continued and agreements were signed.

He went on to note two imminent threats: that states and terrorist organizations would acquire nuclear weapons, and the “collapse of truth,” alluding to lies and fake news.

“Last May, a photo of Malak al-Tanani, a 3-year-old Palestinian girl, was posted around the world, with the gruesome news that she had been killed with her parents in an Air raid. Israeli army. It’s a heartbreaking image, but Malak Al Tanani doesn’t exist. The photo is taken from Instagram. It belongs to a girl from Russia,” said the Prime Minister, as an example of the evil of his country.

He asked the Heads of States why they listen to those who invest billions of dollars in distorting the truth and siding with Islamic extremists.

As a proud sovereign state and a Member State of the United Nations on an equal footing, Mr Lapid asserts that he will not remain silent when those who want to harm Israel “use this very moment to spread their lies about us”.

“The conductor of this hate orchestra is Iran,” he continued, describing the regime haters as Jews, women, gays, Westerners and other thinking Muslims, “like Salman Rushdie”.

Their hatred perpetuates their oppressive rule, he explained, recalling that Iran is the only UN Member “to publicly declare its desire to destroy another Member State.

However, they flout many of Israel’s claims of “total destruction… this building is silent”.

“The country that wants to destroy us is also the country that founded the largest terrorist organization in the world, Hezbollah,” the senior Israeli official said, adding that if Iran gets a nuclear weapon, “they’ll use it.”

The only way to prevent this is to “put a credible military threat on the table” and then negotiate a stronger and longer-lasting deal with them.

“It should be made clear to Iran that if it goes ahead with its nuclear program, the world will not respond with words, but with military force,” the prime minister said.

He stressed that Israel strives for peace with the Arab world, especially the Palestinians.

“Despite all the obstacles… the majority of Israelis support this vision of a two-state solution. I am one of them,” he said, on the only condition that “a future State of Palestine will be a peaceful state,” and not another terrorist establishment that threatens the existence of the Palestinians. country.

An agreement with the Palestinians, based on two states for two peoples, is the right thing for Israel’s security, for Israel’s economy and for the future of our children.

Mr. Lapid recounts a personal story of having to wake his nonverbal autistic daughter at 3am to take her to a bomb shelter, because a rocket was exploding above his house.

“All who preach the importance of peace are welcome to try running to the bomb shelter at 3 a.m. with a girl who cannot speak. To explain to her, without words, why would anyone want to kill her,” he said.

As for the people of Gaza, Lapid stressed his desire to help them build a better life and economy, but “we have only one condition: Stop firing rockets and missiles at our children.”