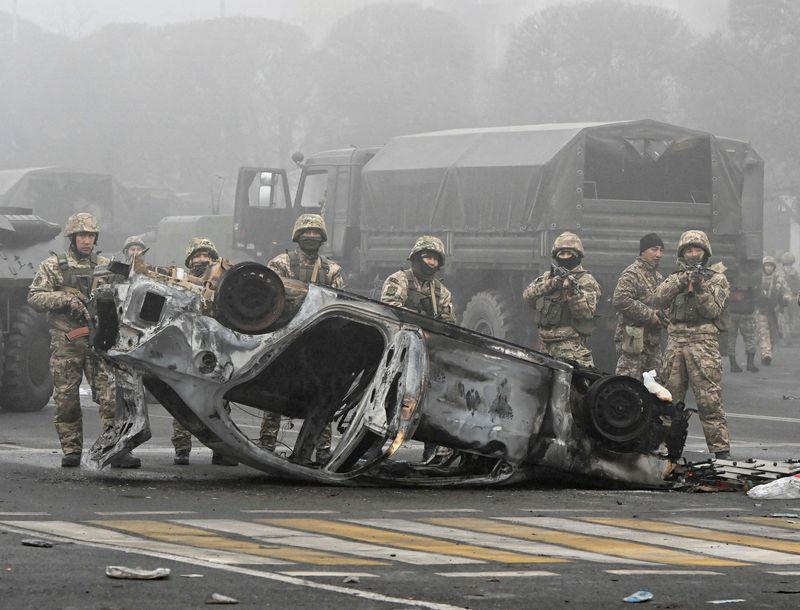 © Reuters. FILE PHOTO: Troops are seen in the main square, where hundreds of people have demonstrated against the government, following the authorities’ decision to raise the price limit of liquefied petroleum gas, in Almaty, Kazakhstan January 6, 2022. REUTERS / Mariya Gordeyeva

Kazakhstan’s security forces arrested a total of 7,939 people on Monday due to last week’s unrest, the Interior Ministry said.

Authorities have blamed the violence on “extremists” and “terrorists” some of whom they say are foreigners.

Karim Masimov, the former head of the National Security Committee, was detained on suspicion of treason last week, days after President Kassym-Jomart Tokayev sacked him.

Tokayev also fired his cabinet, ordered a shootout to end the unrest and declared a state of emergency in the oil-rich country of 19 million people. He also asked for a Russian-led military bloc to send troops, who the government said were deployed to guard strategic objects.

Russian and state media reported 164 people were killed in the clashes, citing a government social media post. But health authorities and police did not confirm the number and the social media post was later deleted.

“I think there has been some kind of conspiracy involving domestic and foreign destructive forces,” Foreign Minister Yerlan Karin told state television on Monday, without naming any suspects. any.