KHARNAK, India – Nomad Tsering Angchuk vowed to stay in his remote village in the Ladakh region of India.

His two sons and most of his villagers have migrated to a nearby urban settlement but Angchuk is determined to herd his fine cashmere-producing goats in the treeless village of Kharnak, a cold but hauntingly beautiful mountainous desert.

The 47-year-old herds 800 sheep, goats and a herd of 50 Himalayan yaks in Kharnak. In 2013, he migrated to Kharnakling, an urban settlement on the outskirts of a regional town called Leh, but returned a year later, not because his old home had gotten better, “It’s because urban centers are getting worse and there are just trivial jobs for people like us,” he said.

Located between India, Pakistan and China, Ladakh has faced both a territorial dispute and the severe effects of climate change. The region’s sparsely populated villages have seen shifting weather patterns that have altered people’s lives through floods, landslides and droughts.

Thousands of Ladakh nomads, known for their unique way of life in one of the most hostile landscapes in the world, are at the center of these changes, compounded by border conflicts and grazing land be narrowed. The changes have forced hundreds of people to migrate to mainly urban settlements, while others try to make it a more livable place.

Angchuk’s sons did not return – they did not want to be shepherds, he said – and settled in Leh. One became a construction contractor and the other worked at a travel agency, part of the region’s burgeoning tourism industry.

With more than 300 days of sunshine, the desert lies in the rain shadow of the Himalayas and receives only about 4 inches (100 mm) of rainfall annually.

At 15,000 feet (4,750 meters), temperatures can drop to minus 35 degrees Celsius (minus 31 degrees Fahrenheit) during the long winter months. But it is getting hotter.

Sonam Wangchuk, an engineer working on sustainable solutions at the Ladakh Alternatives Institute in the Himalayas, said there is no word for mosquito in the local Ladakh language, but the area is now teeming with these insects. .

“All of these things come with a climate viability for them,” he said.

Ladakh’s thousands of glaciers, which help give the rugged region its title of one of the world’s water towers, are receding at an alarming rate, threatening the water supplies of millions.

Romshoo said his team studied seven glaciers in the Kashmir and Ladakh Himalayas for nine years but “this year shows the maximum reduction,” referring to the amount of ice that has disappeared.

Drung-Drung, Ladakh’s second largest glacier, has melted to a thickness of five meters (197 inches) this year compared with the annual average of one meter (39 inches) over the past few years.

The melt, which has been exacerbated by a local increase in pollution, has been made worse by the militarization of the region, experts say. Black carbon or soot from burning fossil fuels on glaciers absorbs sunlight and pollutes waterways, threatening the region’s food, water and energy security.

Engineer Wangchuk said pollution was “a huge environmental attack”. “Mostly because the heating roofs can be easily replaced with non-carbon based heating systems.”

Today’s Ladakh is “probably the most heavily militarized region, where the civilian-soldier ratio is 1:2,” he added.

The ongoing standoff between India and China has seen the deployment of tens of thousands more troops to the already militarized region.

“It’s not just a small conflict, it’s more than that and whoever wins we all lose.”

Breeders say that with access to breeding and breeding areas normally blocked by troops on both sides, newborn goats and sheep are slowly dying in the extreme cold in the areas. higher.

Shepherds have roamed these grasslands on the rooftops of the world along the unmarked border with China for centuries, where harsh winds caused goats to grow super-furred. their softness.

Cashmere got its name from the dispute Kashmirwhere artisans weave wool into fine yarns and delicate clothing items that run into the thousands of dollars a piece in the major handicraft export industry.

Wangchuk said of the Kharnak nomads: “There is no other product that brings in as much revenue as what they produce and they are the real creators of wealth in Ladakh. “They are the most precious but the most forgotten.”

The nomads lead a weary life and follow a strict routine around the clock. They milked and sheared animals twice a day, maintained stone-walled stables, weaved carpets, and collected and dried manure for fires and cooking. Shepherds also transport their animals from place to place more often than usual in search of greener grazing areas.

But there is almost no proper health care, schools or irrigation systems.

“Working here all year, no days off. Angchuk, a nomad, said. “In about a decade, I don’t think there will be any Kharnak nomads even though our people will be around. We will be history.”

Authorities say they are doing everything they can to stop the flight of the nomads. Today, the village has solar panels to provide electricity, prefab government-built huts, and water fountains. Some parts have telecommunications coverage.

But breeders say it’s not enough.

Tundup Namgail, the head of the Leh district’s sheep-breeding department, said that despite all the facilities, nomads need to be “seduced back by real conditions, not by romanticizing their lives”.

“The only way to keep them there is to improve their profitability. Make them rich somehow,” he said.

Other solutions are emerging. The ice stupa, an artificial glacier created by villagers and named after a type of sacred Buddhist structure, is becoming an alternative source of water.

In winter, villagers store water in the form of ice cones that fall down as temperatures warm.

In the local village of Kulum, this method has worked to some extent.

About eight out of 11 families in the farming village migrated to other areas after a catastrophic drought that led to deadly floods in 2010 and depleted Kulum’s water resources.

A decade later, villagers and a group of environmental activists, including Wangchuk, established an ice stupa on a nearby mountain. Last year, several families returned when a trickle of water from an artificial glacier irrigated some of the village’s fields.

However, experts say flash floods and droughts caused by climate change have disrupted the hydrological systems of many villages.

“It’s a kind of blessing in disguise when less people are doing farming,” says Wangchuk. “The non-farmers are helping those who are farming by providing the little water available.”

However, Kharnak shepherd Paljor Tundup still worries that he may be the last generation of shepherds in the region.

“Our children don’t want this life,” he said, picking up a roll of wool to give to his daughter, who was weaving a rug nearby. “Honestly, we don’t have much to argue with them about this lifestyle either.”

Video: For the first time since 2013, Putin canceled his year-end press conference 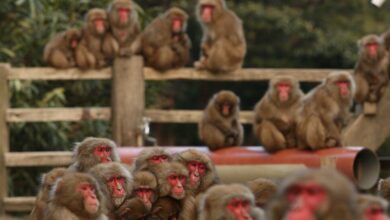 A Maraaging monkey was killed in Japan. Others will take its place.