NEW DELHI: Mahatma gandhi‘s favorite hymn’Follow me‘was removed from Beat back on January 29 this year, in another controversial move after Amar Jawan Jyoti at India Gate was “merged” with the National War Memorial on Friday.
‘Abide with Me’, obsession Christian hymns It was composed by poet Henry Francis Lyte in 1847 and is often sung to William Henry Monk‘s melody’Eventide‘, has been part of the Beating Retreat since 1950.
It was put on hold for 2020 and 2021 at the last time after outcry over the government’s move to remove it from the musical show, performed by massive military bands. in Vijay Chowk on the majestic Rajpath to signal the end of the annual Republic Day celebrations.
“The beautiful ceremony ‘Abide with Me’ is part of a somber ceremony that has not had any religious significance for decades. Its poetic, even when the sun sets behind the Raisina Hills with Rashtrapati BhavanThe Parliament Buildings, North and South Blocks are lit up, reminding us of our fallen comrades. It’s sad to see it scrapped this year,” a senior official said.
When contacted by TOI, a Defense Ministry official said, “’Abide with Me’ has been replaced by the popular ‘Ae Mere Watan ke Logon’ during the ongoing ‘Azadi ka Amrit Mahotsav’ celebration to celebrate 75 Five Days of Independence.”
Written by Kavi Pradeep and composed by C Ramchandra, ‘Ae Mere Watan ke Logon’ was sung for the first time by Lata Mangeshkar during Republic Day celebrations in 1963 in honor of the 3,250 soldiers who made their last sacrifice in the war. 1962 war with China. Officials say Western tunes are being replaced by ‘swadeshi’ tunes composed by Indian composers over the past few years, with the patriotic song ‘Sare Jahan se Acha’ also replacing traditional The old tradition was to play ‘Abide with Me’ at the end of the ceremony.
In earlier years, in addition to Indian tunes, military bands played Western tunes such as the evergreen ‘Colonel Bogey’, written in 1914, and the ‘Sons of the Brave’, composed in 1898. , borrowed from the British. All of them have been gradually phased out.
In fact, ‘Drummers Call’ will be the only Western tune in this year’s ceremony, which will also see drone and laser demonstrations. 24 Indian tunes including ‘Kadam Kadam Badhaye Ja’, ‘Veer Sainik’, ‘Hey Kanchha’, ‘Swarn Jayanti’ and ‘Golden Arrows’, among others. 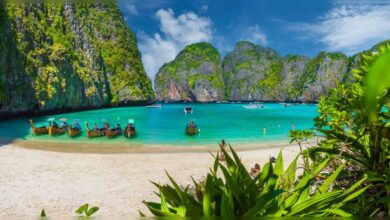 In photos: Most beautiful beaches on Earth