Comprehensive India Deepti Sharma recently ran England’s Charlie Dean out as a non-striker in the women’s ODI at Lord’s in September. Dean’s dismissal sparked a debate on social media, with fans divided over the form of the dismissal. While many consider it against the spirit of competition, the Marylebone Cricket Club – defenders of the cricket rules – earlier this year switched dismissal from the ‘unfair play’ section of their rules. they become ‘out of’ cross-section.

Incidentally, during the 3rd T20I between Australia and the UK, Jos Buttler had an interesting conversation with Mitchell Starc after the ballman warned him for leaving an early finish on the striker not the striker.

In the fifth part of the match, Starc was bowling with Dawid Malanbut showed great awareness by spotting Buttler leaving his fold, while he was preparing to deliver.

However, Starc dug deep into Deepti while doing so. “I’m not Deepti, but I’m not going to do it. Doesn’t mean you can leave early,” Starc told Buttler.

Now, former Indian polisher Hemang Badani lashed out at Starc for including Deepti’s name in his argument with Buttler.

“Grow up Starc. That’s really bad on you. What Deepti has done is within the rules of the game. If you just want to warn the striker not the striker and not send him out then then go for it. it’s your decision, but you putting Deepti in this is not what the cricket world expects of you,” Badani tweeted.

Grow up Starc. That’s really poor from you. What Deepti did was within the rules of the game. If you just want to warn the non-striker and don’t take him out, that’s fine and your decision to make but you bringing Deepti here is not what the cricket world expects of you https://t.co/vb0EyblHB8

Starc was also criticized by fans for his comments. 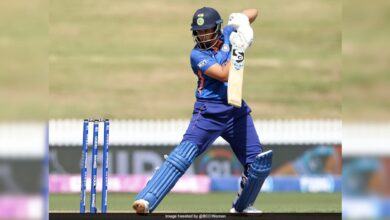 NASCAR Bristol takeaways: How Chris Buescher won; who was eliminated?