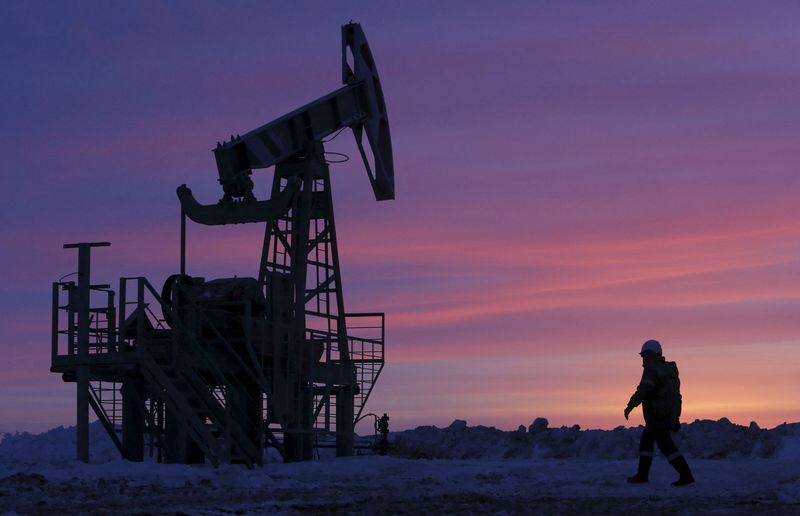 © Reuters. FILE PHOTO: A worker walks past a pump boom on an oil field owned by the Bashneft company near the village of Nikolo-Berezovka, northwest from Ufa, Bashkortostan, Russia, January 28, 2015. REUTERS/Sergei Karpukhin

(In paragraphs 4 and 17, change the analyst name to Yawger, not Yawner)

BENGALURU (Reuters) – Global oil prices on Wednesday posted their biggest plunge since the early days of the pandemic nearly two years ago, after the United Arab Emirates said the OPEC member would support increased production into a market disordered by supply disruptions due to sanctions imposed on Russia following its invasion of Ukraine.

“We support increasing production and will encourage OPEC to consider higher production levels,” Ambassador Yousuf Al Otaiba said in a statement posted on Twitter by the UAE Embassy in Washington.

“It’s not for nothing. They were able to bring about 800,000 barrels to market very quickly, even immediately, giving us one-seventh of the way there in replacing Russian supply.” Bob Yawger, Energy Futures Manager at Mizuho, ​​said.

The plunge in prices was also exacerbated by traders explaining some reported remarks by an Iraqi minister that the country was ready to increase output if required. However, state-owned crude marketer SOMO later clarified that it sees the OPEC+ monthly increase as sufficient to address the oil shortage.

The language of the Organization of the Petroleum Exporting Countries changed this week as Secretary General Mohammed Barkindo said that supply was increasingly lagging behind demand.

Just a week ago, the group and its allies, known as OPEC+, blamed the price increase on geopolitics rather than the lack of supply and decided not to increase production any faster than it currently has. OPEC+, which includes Russia, has set a goal of increasing production by 400,000 barrels per day per month, and has resisted requests from the United States and other consuming countries to pump more.

Russia is the world’s top exporter of crude oil and fuels, shipping about 7 million bpd or 7% of global supply.

Oil prices fell at the start of the session after the International Energy Agency said more oil reserves could be tapped to make up for disrupted Russian supplies.

“If there is a need, if our government decides to do so, we can bring more oil to the market, as part of the response,” said IEA director Faith Birol.

Birol said the IEA’s decision last week to release 60 million barrels of oil from strategic reserves was the “initial response”.

His comments echo those of US State Department Senior Adviser Amos Rothstein at an industry conference on Tuesday, who also hinted that more releases are likely to come.

U.S. strategic oil inventories fell last week to their lowest level since July 2002, as the Biden administration approved November releases as part of a larger effort to boost resources. US fuel supply. [EIA/S]

Edward Moya, senior market analyst at OANDA, said the world is working together to address the spike in oil prices and that has put crude prices to a near-term top.

The United States banned oil and gas imports from Russia on Tuesday, while Britain said it would eliminate Russian oil imports by the end of the year, adding to export disruptions caused by a series of orders. punitive economic sanctions against Russia.

Oil prices have rallied more than 30% since the Russian invasion on February 24, hitting a peak of more than $139 a barrel on Monday, and the Relative Strength Index for Brent, a momentum indicator, shows the market The school is selling off.

“There’s definitely room for a little chill here,” Yawger said. “At these levels, you’ll run out of buyers.” KKR has no plans to lead Toshiba’s bid, but could enter a deal

Soccer-Infantino Says Soccer Will Be U.S. Top Sport By 2026 World Cup According to Reuters