The Polish Crown Alliance Party has proposed legislation requiring Ukrainian citizens living in Poland to declare “loyalty” to Warsaw and condemn historical crimes against Poles by Ukrainian nationalists. cause.

The draft law was announced by the far-right party and its youth wing during a press conference in the country’s parliament on Thursday.

The party, represented only in parliament by its leader, Grzegorz Braun, argues that Warsaw should not expect loyalty solely from Ukrainians, who have poured into the country en masse amid the conflict between Moscow and Kiev, but realistic “request” it. In recent months, the party has repeatedly raised the alarm about what it calls “Ukrainization of Poland” and is supposed to be happening “Ethnic Alternative” Poles of Ukrainian refugees.

The crown has published a document, titled ‘Declaration of Allegiance to the Republic of Poland’, which it believes every Ukrainian citizen should sign. The document, written in both Polish and Ukrainian, asserts that the signatories knew “The mass crimes committed by the so-called Ukrainian Rebel Army against civilians during the Second World War until 1947 in the southeastern regions of the Republic of Poland.”


“I pledge to spread the word about the crimes of [Stepan] Bandera among ordinary people after I returned to Ukraine to strengthen Polish-Ukrainian relations in the spirit of friendship and respect,” reading material.

While Poland has been one of Ukraine’s most fervent supporters in the midst of the ongoing conflict, Kiev and Warsaw have diametrically opposed views on their shared past, which has repeatedly led to hostile remarks from both sides.

While Ukraine considers nationalist leaders – and Nazi collaborators during World War II – such as Bandera and Roman Shukhevych, to be national “Hero” Warsaw holds them responsible for the massacres of Poles during World War II in Volhynia and Eastern Galicia, which are recognized as “Genocide.” Ethnic cleansing operations against the Poles were ordered by Nazi Germany and carried out by paramilitary units consisting mainly of ethnic Ukrainians. 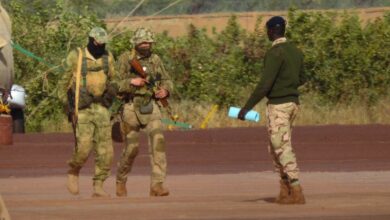 The main target of Russian Mercenaries in Africa is civilians, reports say