Polling Twitter users was key to Elon Musk’s journey from fan to owner of the social media platform, but now the knockout votes are non-binding. could cost him his job as CEO.

Musk, who has been using the simple yes/no tool since at least 2018, asked users on Monday whether he should step down as boss of the social media company – and they answered overwhelmingly “yes”.

Here are four of his most prominent polls.

Long before Musk owned Twitter, he used the platform to point out what he felt was sharp media practice.

Others may say that he is just trolling journalists.

In one of his first Twitter polls, in May 2018 he floated the idea of ​​creating a “media authority website” for reviews. individual journalists.

“Thinking of calling it Pravda,” he added with his familiar sarcasm.

Nearly 90 percent of the 680,000 voters supported his plan, though some commenters were unimpressed.

“Please stop,” journalist Shannon Stirone wrote in the comments section below the poll, accusing him of sowing distrust.

One of the most controversial decisions by former Twitter owners was to close the account of former president Donald Trump due to his role in inciting the December 6 attack on the US Congress.

“Reinstate former President Trump,” he wrote in a poll that drew more than 15 million votes – 51.8% approved the proposal.

Like most of his polls, that’s the outcome most people feel Musk wants.

The former president described the poll as “very overwhelming” but it is unclear if he will return to the platform.

Musk has also researched cryptocurrencies – known by some regulators as the Wild West of the financial industry.

In May of last year, he tweeted several times about a hitherto worthless currency, dogecoin, created as a joke.

The highlight was a Twitter poll he took to ask if Tesla should accept dogecoin as a form of payment.

More than 78% of the nearly 4 million participants said yes.

Around this time, the price of the coin spiked from about 5 cents to about 50 cents, before falling again.

Tesla’s website still claims to accept cryptocurrency for certain products, but it’s unclear if anyone has ever used the volatile token to purchase any Tesla products.

“Recently the majority of unrealized profits generated as a means of tax evasion, so I propose to sell 10% of my Tesla stock,” he tweeted last November, asking users whether he should do it or not.

The poll garnered 3.5 million votes with 58% saying he should.

The tweet had serious real-world consequences with Tesla shares plunging after the polls passed.

Additionally, regulatory filings reported that at least part of the sell-off was orchestrated weeks before the Twitter poll, casting doubt on the much-vaunted democratization instincts of the Trump administration. Musk.

The Wall Street Journal reports that regulators have opened an investigation into the sale due to suspicions of insider trading between Musk and his brother, Kimbal.

Sam Bankman-Fried returns to US after abandoning extradition war 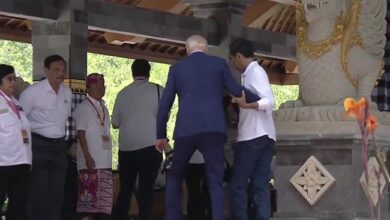 Joe Biden Stumbled On Stairs. This Happened Next