Russian Foreign Minister Sergey Lavrov told the state-controlled RT television channel and the RIA Novosti news agency that Russia plans to maintain control over wider areas beyond eastern Ukraine, including areas Kherson and Zaporizhzhia in the south, and more gains will be made elsewhere.

Foreign Minister Lavrov’s remarks and Ukraine’s missile attack on a strategically important bridge in the Kherson region show that the nearly five-month war could expand after mainly breaking out in the east. Ukraine since April.

Russia’s top diplomat noted that when Russia and Ukraine in March discussed a possible agreement to end the fighting, “Our readiness to accept Ukraine’s proposal is based on geography.” of March 2022.”

With Western countries supplying Ukraine with longer-range weapons, Lavrov said that “Russia’s geographical tasks will be pushed even further than the current boundaries because we cannot allow the Ukraine, under the control of Zelenskyy or whoever comes to succeed him, has weapons that will directly threaten our territory and the territories of those republics that have declared independence.

Russia Invasion of Ukraine on 24 February and quickly seized territory, but withdrew from the capital area and north to focus on capturing the Donetsk and Luhansk provinces, which pro-Moscow separatists have partially controlled since 2014.

As Russian forces captured more of the two provinces, which together make up Ukraine’s industrial Donbas region, Ukrainian officials planned a counterattack to recapture Russian-occupied areas to the south.

Ukraine’s attack on the Dnipro river bridge, the second in days, appears to be aimed at loosening Russia’s grip on the region south of Kherson.

Kirill Stremousov, deputy head of the Russian-installed temporary administration that runs the region, said the Ukrainian military attacked the Antonivskyi bridge with multiple US-supplied HIMARS missile launchers. The 1.4 km (0.9 mi) long bridge is the main river crossing in the Kherson area, and the Russian military uses it to supply its forces. Stremousov said that due to the bridge’s damage, pontoon bridges will be built over the river, also known as the Dnieper.

The head of the Moscow-appointed Kherson administration, Vladimir Saldo, said cars could continue to cross the bridge but trucks could not and could instead use a dam 80 kilometers (50 miles) away. .

Early in the war, Russian troops occupied the Kherson area just north of the Crimean Peninsula that Russia annexed in 2014. They faced counterattacks from Ukraine, but largely held their ground.

Kherson – a shipbuilding site at the confluence of the Dnipro and Black Sea rivers – is one of several areas that a US government spokesman said Russia is trying to take over.

White House National Security Council spokesman John Kirby on Tuesday said US intelligence officials have evidence that Russia wants to annex Kherson, Zaporizhzhia and all of the Donbas through referendums, as soon as possible. from September.

Ukrainian authorities, who have reported Russian missiles in recent months nearly hit the plant, did not immediately comment on the report.

Much of Russia’s forces are fighting in the Donbas, where they have made slow gains in the face of Ukrainian resistance. The Russian military has used long-range missiles to hit targets across Ukraine, killing hundreds of civilians.

Ukraine’s presidential office said at least 13 civilians were killed and 40 injured in Russian shelling across the country in a 24-hour period from Tuesday to Wednesday.

On Wednesday, at least three more people died when Russia bombarded the northeastern city of Kharkiv with a Hurricane salvo missile system. The victims, who were waiting at a bus stop, included a 69-year-old man, his wife and a 13-year-old boy.

According to the Kharkiv Regional Prosecutor’s Office, the boy’s 15-year-old sister was injured. Video shows the boy’s father, apparently in a state of shock, praying above his son’s naked body and holding his hand.

Russia has repeatedly accused Ukraine of carrying out cross-border attacks. Another such report came on Wednesday, when Belgorod Governor Vyacheslav Gladkov said on Telegram that Ukrainian forces had fired on two Russian border villages.

Most of the villagers had previously been evacuated in a state of emergency, but Gladkov said the latest attack killed a man, damaged homes and a club in the village.

In other developments on Wednesday:

– One Associated Press investigation discovered that many refugees from Ukraine were forced to make a surreal trip to Russia, suffered human rights violations along the way, had their documents stripped and were abandoned and bewildered as to where they were.

—U.S. Defense Secretary Lloyd Austin said Wednesday that Ukraine has made effective use of the US-supplied HIMARS missile launchers and will provide four more, bringing the total to 16 HIMARS launchers mounted on trucks fire GPS-guided missiles that can reach targets up to 80 kilometers (50 miles).

– Ukraine’s first lady, Olena Zelenska, called on US lawmakers in her speech at the US Capitol to have more air defense systems to protect her country’s skies. In a tireless speech at the Capitol, Zelenska shared images of bloody baby carriages and crumbling bodies left over from Russian missile attacks.

– Headquarters of the European Union offer that member states cut their natural gas use by 15% in the coming months to ensure that any outright cuts in Russian natural gas supplies will not cause hardship. manage winter break. While the initial cuts were voluntary, the European Commission also requested the right to impose mandatory cuts across the bloc in the event of severe gas shortages or exceptionally high demand.

Zelenskyy, in a video address on Wednesday night, said that Europe should reduce its dependence on Russian gas in the past. “If our position had been heard sooner,” he said, “we would not have had to find an urgent way to fill the deficit that Russia is artificially creating in the European market.”

– In an indication of the crippling economic impact of war, Ukrainian government said it would ask investors to allow the country to defer payments on foreign debt for two years. The leader of a group of creditors said they agreed to the delay and urged bondholders to do the same. 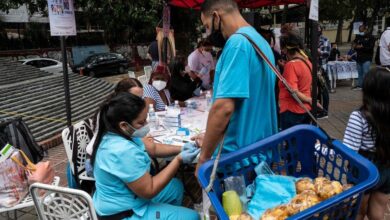