It was a year when time seemed to hurtle back toward the past, as a brutal land war of medieval cruelty gutted Ukrainian villages and cities and sent millions on a stumbling path into the unknown.

It was a year when the world glimpsed too much of its apparent future, when fire turned Californian hills a lurid red, drought sucked a lake dry in Nevada, and floods transformed roads into rivers in Florida and Pakistan. The weather behaved like an angry, exhausted 2-year-old, lashing out in every which way, trying to send a message that was not always deciphered.

And 2022 was a year in which the present stood up and said “Hold on, we’re not collapsing into a hopeless future. Not quite yet.” In the midterm elections, Americans made clear they were exhausted by years of cries of doom. They sought stability and a bit of quiet.

After three years of too much disease and death, the virus that brought the world to a halt didn’t go away. But science, weary resignation and ever-resurgent hope helped people get on with life, and many found at least some semblance of the normalcy they craved.

The images of 2022 are grim and serious — in Ukraine, a funeral for a 13-year-old girl; dead people stuffed into garbage bags, sprawled on pavements, strewn around in mass graves. But there are scenes, too, of joy and achievement — girls’ mouths agape over victory on a lacrosse field in Virginia, a man on horseback triumphantly dunking a basketball into a hoop in a small town in Oklahoma.

In all, though, the journey through this year, like too many of late, was a push across too much treacherous terrain.

Many of the fault lines were man-made: In South Korea, a Halloween celebration collapsed into a deadly crush of people. In Uvalde, Tex., one man with a gun turned a hall of learning and growth into a place where children were executed, an utterly impossible horror now become all too common. In Buffalo, another man with a gun made a supermarket called Tops into a bottomless well of grief, killing people he hated because of how they looked. In San Antonio, 51 migrants packed into a truck like sides of meat, though transported with far less care, ended up dead, suffocated on the way from Mexico into Texas.

Even the less violent images often speak of disputes that never seem to ease: On the streets, there were tears and cheers, relief and anxiety, after six of the Supreme Court’s nine justices changed the rules over who decides whether a conception shall become a person.

There were moments that spoke of possibility, too often dashed: At opposite ends of an absurdly long table, Russia’s bellicose leader, Vladimir Putin, and French President Emmanuel Macron, divided by a continent of conflict, stared off into any place but each other’s souls. There was unexpected drama: At the Oscars in Hollywood, before a worldwide audience, a star actor slapped a star comedian over a joke. And then there was the rolling carnival of the permanent American political campaign: People wearing their passions on their shoes, their neckties, their hats and, of course, their sleeves. People who mostly can’t stand each other nonetheless headed out to show their colors and make their pitches and, even now, put at least some of their trust in a fistful of ballots.

It’s no accident that these images close with a rocket ship escaping gravity, a fireball of hope, a powerful reach for a future that is somehow better, bigger, bolder. Blast off!

To heighten your experience, we’ve created a musical score to accompany these images.

In Ukraine, Russia’s assault was repeatedly beaten back, but the damage done day after day was relentless and devastating: Husbands and wives, parents and children tore themselves from each other — women and little ones fleeing by train, bus and foot; men sent off to confront an enemy whose troops seemed at once uninspired and cruel. Ukrainians crowded into underground shelters, hid in bombed-out apartments, watched week after week as their homes went up in smoke. Death came from every direction, from tanks and drones and bombs. On military maps, arrows pointed to progress against the invaders. On the ground, it was a far more searing story, told in caskets and body bags and dead human beings, splayed across the streets.

Overflow covid-19 patients wait in a temporary holding area outside a hospital in Hong Kong in February as cases of the coronavirus overwhelm the city’s public health-care system.

Health officials check on covid patient Steve Byrd, who expressed regret for not being vaccinated against the coronavirus, in an intensive care unit in Lanham, Md., in January.

People watch as a truck convoy protesting coronavirus-related mandates makes its way along Interstate 495 in McLean, Va., in March.

Veronica Alvarez stands for a portrait during New York’s Pride Parade, in the wake of the Supreme Court ruling overturning Roe v. Wade in June. “Coming together in solidarity after the news we just got is amazing,” she said.

Sri Lankan protesters demanding the resignation of President Gotabaya Rajapaksa swim in his pool after storming the presidential compound in July. Rajapaksa stepped down that month.

In Tbilisi, Georgia, people burn an effigy of Russian President Vladimir Putin in March as part of rituals marking the end of winter.

WNBA player Brittney Griner in Russian court in July. She was sentenced to nine years in prison after customs agents found vape cartridges containing cannabis oil in her luggage and was transferred to a penal colony. Griner was released Dec. 8 in a prisoner swap.

Democracy was on the ballot. So were the frustrations and resentments of everyday life, the soaring prices, the feeling of insecurity, the way people didn’t seem to get along with one another anymore. Amid all the antagonisms between red and blue, party against party, a people divided even within families, Americans campaigned much as they always had — waving flags, going door to door, showing their colors — demonstrating that despite a historic wave of mistrust, they were sticking with the system. By and large, they voted for stability, for relief from the cacophony and hostility of the past few years. Democracy may have won the day, but any victory remained fragile. The battle for the future lumbers on.

The family of Edivaldo Miranda, a banana plantation worker, sells some of his produce on the road to tourists and travelers in the city of Eldorado, known to be one of the poorest regions of the Brazilian state of São Paulo.

Patients wait in line for medical care in Sangin, Afghanistan, in June.

More than 30 people are buried during a ceremony in June in the village of Slaysha, Afghanistan, after an earthquake.

Women register for aid at a makeshift shelter in a Hasakah, Syria, mosque in February after fleeing fighting.

Somali women at Mogadishu’s Lido Beach, which has experienced a revival in recent years. It used to be a frequent target of Islamist militants.

Benedict Bird, with son Kurtlen, 3, looks down a stretch of the Outback Way near Atitjere, Australia, in August.

Through flames and dust, with too much water in some places and not enough in others, the elements seemed to speak with rage and desperation in 2022. Tornadoes plucked apart houses as if they were built of matchsticks. Floods tossed boats and lumber and sheds about, creating new waterways where man had built roads of concrete and asphalt. It seemed at times like a wholesale reordering of nature, with a shifting climate turning dry spots wet and wet spots dry. Hot places got hotter. In image after image, people can only stare at what was and wonder what’s next.

Mourners gather in Nahualá, Guatemala, to bury Melvin Guachiac, 13, who was one of 51 migrants found dead inside a tractor-trailer in Texas after crossing from Mexico in June.

Rescue personnel conduct search operations after a bridge collapsed in Morbi, India, in October. Dozens of people were killed.

An injured woman receives help after a deadly crowd crush during Halloween celebrations in the narrow streets of the nightlife district of Itaewon in Seoul on Oct. 29. More than 150 people were killed.

Javon Williams, 13, is comforted by the Rev. Jaland Finney as he speaks during a march and rally for Jayland Walker, a Black man shot more than 40 times by Akron, Ohio, police in late June.

Friends and family mourn Lawrence Morgan, 17, at a June memorial service in Parma, Ohio. He was fatally shot, part of a spike in U.S. homicides over the past couple of years.

Children run from Robb Elementary School in Uvalde, Tex., during a shooting on May 24. An 18-year-old killed 19 students and two teachers there before he was fatally shot by law enforcement.

Uvalde shooting survivor Caitlyne Gonzales runs through sprayed water near the graves of her friends from Robb Elementary School in July.

Jamaar Carrier holds his daughter, Jamya, 9, during a vigil for the victims of a shooting at a Tops Friendly Markets grocery store in Buffalo in May. Payton Gendron pleaded guilty in November to killing 10 Black people in what authorities say was a massacre fueled by racist hatred.

Antiabortion activists rejoice at the Supreme Court’s decision to overturn Roe v. Wade on June 24. The 1973 Roe ruling had recognized a constitutional right to abortion.

Abortion rights activists gather on the National Mall on May 14, before the Supreme Court overturned Roe v. Wade.

Former Trump White House senior counselor Stephen K. Bannon is led away in handcuffs in New York after being indicted on charges of money laundering, conspiracy and fraud in September.

Actor Will Smith, right, slaps comedian Chris Rock during the Oscars on March 27.

Spectators cheer during the running of the 147th Preakness Stakes at Pimlico Race Course in Baltimore on May 21.

Tennis star Serena Williams acknowledges the crowd after losing at the U.S. Open, which she said would be her final major tournament, in September.

Bodybuilding competitors warm up backstage during the Arnold Sports Festival in Columbus, Ohio, in March.

Darrius Moore rides his horse Flip as he dunks a basketball in Tullahassee, Okla., in February.

King Charles III and other members of the British royal family leave Westminster Abbey on Sept. 19 after the funeral of Queen Elizabeth II. The monarch was a pillar of British life during her 70 years on the throne.

Blooming cherry blossoms are seen along the Tidal Basin in D.C. on March 21.

A dog sleeps on the grave of its owner during Night of the Dead celebrations in the Purépecha Indigenous community of Cucuchucho in Mexico’s Michoacán state in November.

NASA’s Artemis I rocket, with the uncrewed Orion spacecraft aboard, blasts off from the Kennedy Space Center in Florida on Nov. 16. 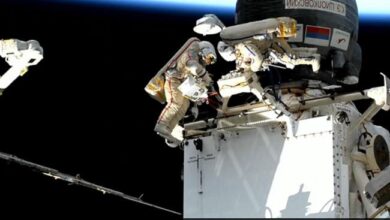 Survey shows lack of Holocaust awareness in the Netherlands