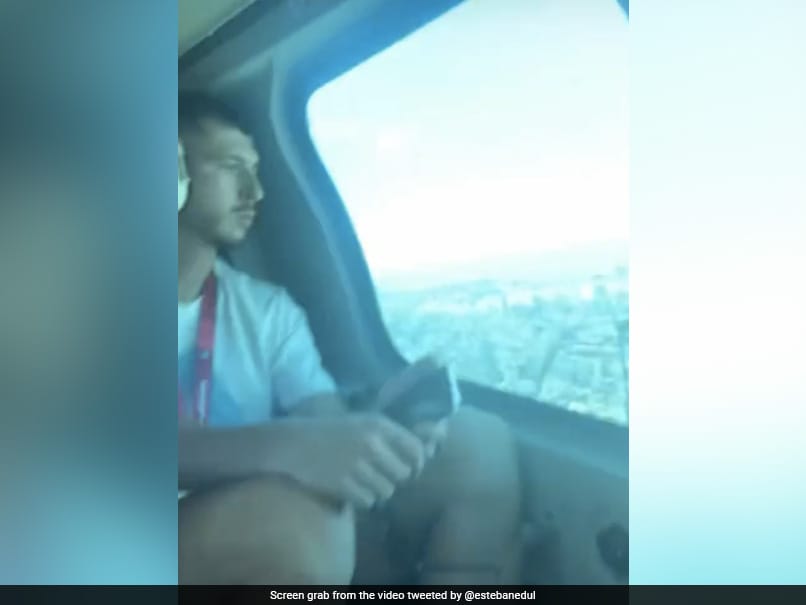 The Argentine players were forced to board the helicopter due to overcrowding.© AFP

Argentina’s World Cup champions were forced to abandon the open-top bus parade around Buenos Aires due to large crowds and instead embarked on a tour of the capital by helicopter, the president said on Tuesday. . “World champions are flying the parade route by helicopter because it is not possible to continue on the ground due to an explosion of public joy,” presidential spokeswoman Gabriela Cerruti wrote on Twitter. The bus crawled along the expected 30-kilometer route towards the center of the capital as crowds of Argentines lined the streets to celebrate their victory over France in the World Cup final.

Millions of people have gathered around various parade points in the capital since dawn to see their heroes in the flesh.

The largest congregation gathers at the iconic Obelisk in the heart of Buenos Aires, which has been the focus of sports celebrations for decades.

Claudio Tapia, president of the Argentine Football Association (AFA), blamed the police for the decision to cancel the planned bus tour.

Tapia wrote on Twitter: “They didn’t allow us to go greet everyone in Obelisk.

“The security agencies that escorted us did not allow us to continue.

“A thousand apologies on behalf of all the champion players. What a pity.”

The news comes nearly five hours after the team departed from the AFA training complex, where they had rested briefly after arriving late at night from Qatar.

Hundreds of people began running towards the presidential palace on another downtown square amid rumors that the players would get there by helicopter.

But it turned out that they were merely flying over a predetermined route before returning to the AFA complex.

An estimated five to six million people were lined up along the parade route, a government source said.

Television footage showed a man trying to jump from the bridge onto the players’ bus but failed and fell into the crowd. Arizona’s No. 10 Azuolas Tubelis brings Wildcats to victory with 21 points and seven pounds