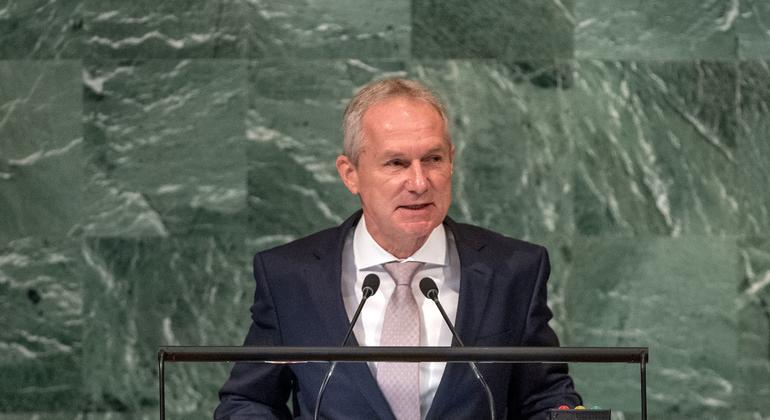 “Solutions, because we’ve drafted many treaties, set great goals, but take too little action.” He explained.

“We need solidarity because inequality has reached record highs…sustainability because we owe it to our children to leave behind a livable world…[and] science because it provides us with neutral evidence for our actions”.

The ‘permanent state’ of the state of emergency

Mr. Kőrösi said that climate change has caused heat waves, floods and droughts while unsustainable consumption and production has left scars on our environment.

“It looks like we are living in a permanent humanitarian emergency,” he said, pointing out that more than 300 million people are in urgent need of aid and protection – a 10 percent increase since January – and climate change, COVID-19 and conflict has pushed global hunger to “alarming levels”.

Meanwhile, inflation is at a 40-year high as violence has plunged a quarter of humanity into turmoil.

“Who would have imagined that war would return to Europe? The Speaker of the National Assembly questioned whether the nuclear threat would return in the political discourse to settle a dispute with a neighboring country? ”, asked the Speaker of the National Assembly, noting that 203 days after the adoption of a resolution condemning the act of military aggression against Ukraine, the bloodshed continued.

He then explained more about some of the positive developments, including a landmark deal on trade grain exportsdiplomatic work to release fertilizer and UN nuclear inspector prevent a possible disaster at one of Europe’s key nuclear sites.

Noting the theme of the debate, “A watershed moment: transformative solutions to intertwined challenges”, Mr. Kőrösi declared his solidarity with Pakistan, where devastating floods washed away hundreds of villages.

He describes “scenes of heartbreaking destruction”, as a “window into our future”.

However, advances in Scientific cooperation and climate diplomacy are current solutions to climate change“But we have to want to put them into practice,” said the senior UN official.

Noting that the International Commission on Climate Change (IPCC) has proven invaluable in supporting political decisions to combat climate crisishe recommends replicating its success in the areas of water, energy, food and biodiversity as “a widely accepted experimental starting point for action”.

“Once this senior week is over, I plan to do a series of consultations with the scientific community, asking them to help us bring… knowledge from the microscope to the microphone,” he said. .

The President of the National Assembly said that the 77th session will be “key” in the preparation SDG Summit 2023and Summit of the future in 2024.

“Next year, we will evaluate SDG 6 in United Nations Water Conference — for the first time since 1977,” he informed world leaders, emphasizing that “this call could not be more urgent”.

When water was seen as the next major driver of global conflict, he raised the triple problem of “too much, not enough, [and] not safe”.

The session will also evaluate Frame Sendai for Disaster Risk Reduction, he continued, maintaining it with Development Agenda 2030, Paris AgreementAddis Ababa Action Program on Development Finance and Our Common Agendait describes the world we want and provides pathways to get there.

“The challenges are huge. And they are connected to each other. But they are not insurmountable,” asserts Mr. Kőrösi.

He stressed the importance of universal respect for the rule of law, warning that when human rights are at stake, “it’s our smoke signal, our call to action“.

He described women’s rights as a “fundamental issue found to be lacking in most societies around the world”, saying it was “simply unacceptable that every third woman experiences violence”. in their lifetime” while adding that they are often left out of decision making and leadership.

Kőrösi testifies that only when everyone is involved, “we will find solutions to the challenges we face.

He continued: “The data show that crisis response is more effective when women take the lead, encouraging everyone to participate for justice, equality and human dignity.

The President of the Council supported the Member States and stressed the importance of “getting our efforts out of this Hall and into our communities”.

To restore the relevance of the Organization in the eyes of the world, he announced his intention to advance negotiations to reform the United Nations. Security Council to more fairly represent the reality of the 21st century.

This is a matter of credibility for our entire Organization and our multilateral order.

“Our opportunity is here and now. Let us act.”