In the oil-rich Niger Delta region of southern Nigeria, residents worry about the health and environmental impact of crude oil spills that have occurred since oil was discovered there in 1958.

At the heart of this is Ogoniland, 261 communities spread over nearly 1,000 square kilometers (385 square miles).

Between 1976 and 1991, more than two million barrels of oil contaminated Ogoniland in 2,976 separate spills as Nigeria became one of the world’s largest oil producers.

In 2020 and 2021, Nigeria’s National Oil Spill Detection and Response Agency (NOSDRA) recorded 822 oil spills spilla total of 28,003 barrels of oil were sprayed into the environment.

Those who depend on farming and fishing have felt their livelihoods are directly affected and people have reported countless health problems.

Life expectancy in the Niger Delta is 41 years, 10 years below the national average. 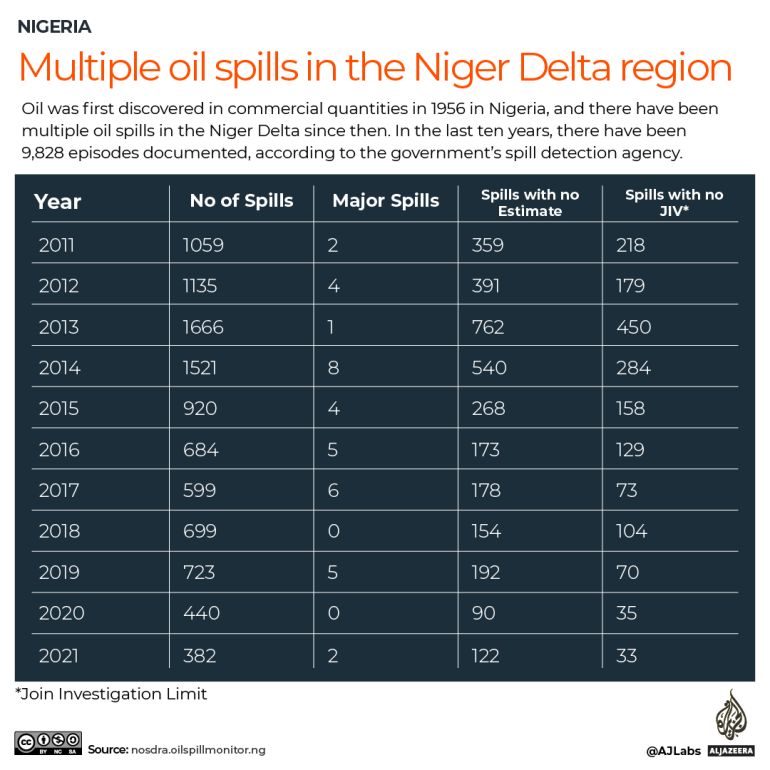 Below is a timeline of the oil spill and related activities in Ogoniland, from 1958 to present.

An oil spill, possibly the first on record, occurred in the Boobanabe community as a result of a fire at Shell’s Bomu oil well.

Ogoni leaders, including environmental activist Ken Saro-Wiwa, founded the Movement for the Survival of the Ogoni People (MOSOP), a non-partisan organization that aims to stop oil companies from falling. and the Ogoni mining government.

Due to growing domestic and international protests, Shell halted production in Ogoniland. It hasn’t pumped oil from most of its wells since, but its pipelines still run through Ogoniland, causing oil to leak.

About 300,000 Ogoni people peacefully protested against Shell and oil pollution. Later that year, Shell requested military assistance to build a pipeline through Ogoniland.

An oil spill occurred in the Yorla community that lasted until May 7, 2001. It caused a fire that consumed commercial foods and medicinal herbs.

Ogoni residents reported an oil spill from a damaged pipeline owned by Shell.

The first of two major oil spills occurred in the Bodo community due to a fault in the Trans-Niger Pipeline. The leak went on for at least four weeks. Shell said 1,640 barrels of oil had spilled, but experts estimate the leak was nearly three times that number – about 4,000 barrels.

The second spill occurred in the Bodo community.

Ten weeks after the second Bodo oil spill, February 19-21, NOSDRA of Nigeria, Shell and the Bodo community conducted a joint investigative visit. Shell later said the spill was caused by equipment failure due to natural corrosion.

Fire and spill at the Bomu manifold caused oil to spill into the swamp. The manifold is the junction where several Shell pipelines meet in Kegbara Dere, Ogoniland. The fire burned for 36 hours.

At the request of the Nigerian government, the United Nations Environment Program (UNEP) conducted an impact assessment of oil pollution across the Ogoni region.

UNEP released a report on the environmental impact of oil industry activity in Ogoniland, showing widespread soil and groundwater contamination and recommending a comprehensive cleanup of affected areas.

Following a class action lawsuit in the UK, Shell claimed responsibility for the double rupture of the Trans-Nigerian Bodo-Bonny Pipeline that caused two major oil spills in Bodo. Trans-Niger transports up to 180,000 barrels of oil per day through the community.

A spill occurred in Kegbara-Dere, about 200 meters (650 feet) from the Bomu manifold.

The Senate Committee on Environment and Ecology meets with Shell Petroleum Development Company of Nigeria (SPDC) on Ogoniland’s environmental degradation.

An explosion occurred at a Shell pipeline, spilling 6,000 barrels of crude oil into Bodo’s creeks and waterways. The people of Ogoni have vowed not to allow oil extraction in the area to resume until the conditions that address the pollution challenges are met.

As revealed by Amnesty International, court documents show that Shell repeatedly made false statements about the scale and impact of the two oil spills in Bodo in 2008.

Forty-five years after the Bomu oil spill, researchers found black soil and layers of oil on the water, although Shell claims to have rehabilitated the area twice in 1975 and 2012.

Shell agreed to clean up Bodo, which was affected by two oil spills in 2008.

The United Nations is committed to continuing to support the implementation of the Ogoni cleanup.

Remediation sites in the Eleme, Tai, Khana and Gokana Local Government areas of Ogoni were handed over to 21 contractors.

According to local newspaper The Sun, two oil spills have claimed the lives of two people in the Kegbara-Dere community.

An investigation by local newspaper Premium Times alleges that unqualified companies were awarded contracts to clean up Ogoni.

Contractors responsible for cleaning up the Bodo community in Ogoniland said 2 million liters (440,000 gallons) of crude oil had been recovered from SPDC’s ongoing exercise in the area.

A parliamentary committee subpoenaed environment minister Mohammed Abdullahi and HYPREP management over the failure to clean up Ogoniland despite a $1 billion payment for the project. How many votes are left? Congressional control hangs in this final count