Ukraine’s officials say the Russian presence in southern regions of Ukraine is becoming more difficult as Ukraine’s long-range systems – many of which are supplied by Western allies – target their supply lines, Ukrainian officials said.

Ivan Fedorov, mayor of occupied Melitopol in the Zaporizhzhia region, said the destruction of a railway bridge southwest of the city over the weekend made Russia’s supply routes more complicated.

Fedorov, who is not in the city, said on Ukrainian television that “the enemy uses Melitopol as a logistics center for the transportation and transshipment of ammunition and heavy weapons. The enemy transports most of the ammunition by air. On the night of August 13-August 14, a railway bridge was blown up, the enemy has not yet recovered, the wreckage is being dismantled.
“We saw the migration of soldiers from Kherson to Melitopol. Soldiers took their families out of Melitopol.”

The Russians have increased security in Melitopol, checking the local population, he added. “The mass screening of local civilians continues in Melitopol, in homes, on the streets,” he said.

Fedorov said that the Russian security service (FSB), Russian reservists and special units of Chechnya were present in the city.

As many as 6,000 people are queuing for evacuation, he said. “People wait for five to seven days, spend the night on the roadside. Going through Crimea will be faster, people also use this route,” he said.

Kherson attack: Meanwhile, Serhii Khlan, an adviser to the head of the Kherson Civil Military Service, told Ukrainian television on Monday that the persistent attacks by Ukrainian forces on the bridges over the Dnipro River have made it difficult to serious hardship for Russian forces.

“The fact that (the Russians) cannot supply ammunition allows us to say that if they cannot solve the problem of crossing the right bank of the Dnipro in the next two weeks, they will have no choice but to leave his position”. . 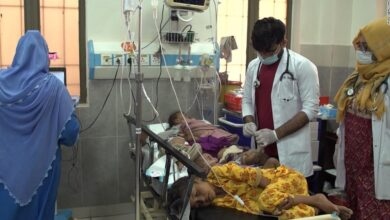