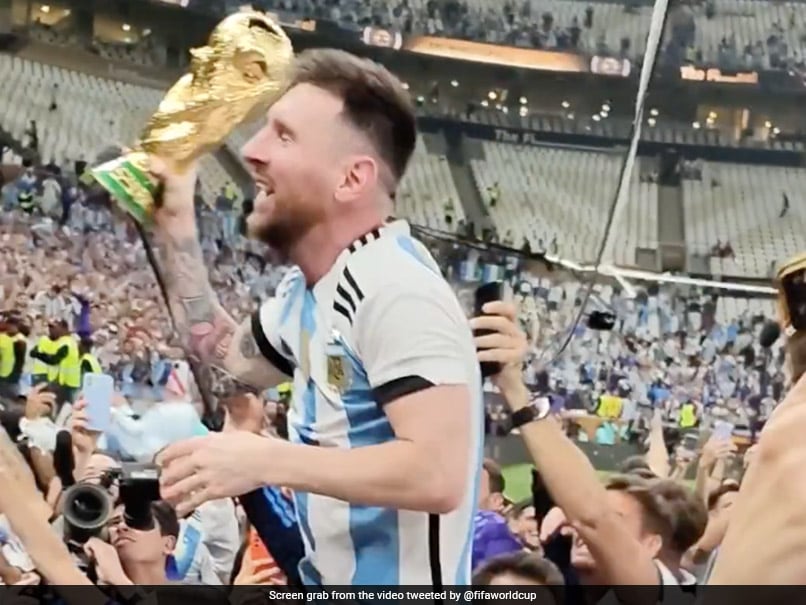 Argentina’s victory over France in the FIFA World Cup final sent a spark of jubilation around the world. Lionel Messi, one of the most famous athletes in the sports field, has a huge fan base all over the world. In his final World Cup match for Argentina, Messi proved to be a key player in his team’s victory. After lifting the world championship trophy for the first time in his career, Messi celebrated victory in style.

Several post-match celebratory videos have surfaced on social media since Argentina’s World Cup win. However, FIFA has now shared an amazing video in which Messi can be seen sitting on the shoulders of the Argentine players with the World Cup trophy in hand.

The entire group can be heard chanting in Spanish while celebrating the achievement with fans. Here is the video:

Blast this at full volume

Messi scored twice against France as the game ended 3-3 after extra time, with Kylian Mbappe hat-trick for the defending champions.

Messi also scored in the penalty shootout with the goalkeeper Emiliano Martinez saved a penalty before Gonzalo Montiel delivered the winning penalty to the delight of Argentina’s players and fans.

There’s been a Copa America title, an Olympic gold medal and a scoring list and statistical records that can never be beaten.

The only gap left on Messi’s résumé – a World Cup win – was comprehensively filled on Sunday night during a mesmerizing 120 minutes at Lusail Stadium.

Daniel Craig is interested in killing James Bond in 2006 Chelsea vs Dinamo Zagreb, Champions League: When and Where to Watch Live TV, Live Streaming