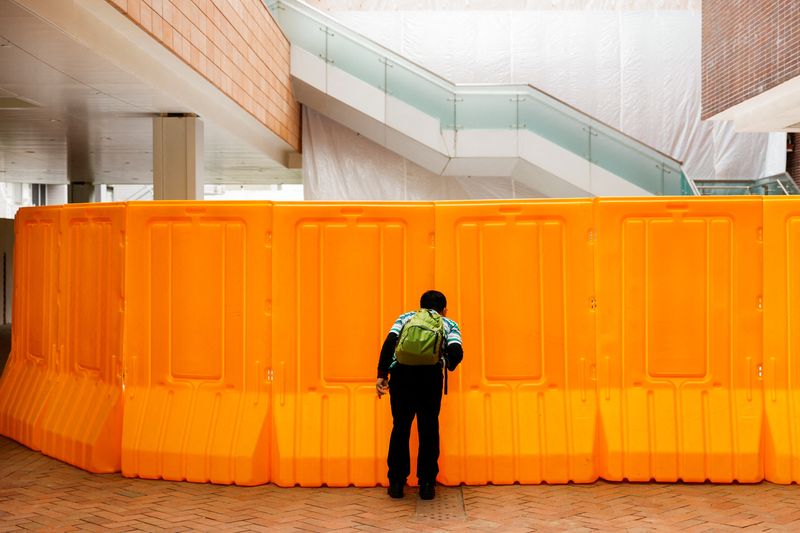 © Reuters. A man tries to look at the site where the “Pillar of Shame” statue by Danish sculptor Jens Galschiot, in memory of victims of the persecution on Tiananmen Square in Beijing on June 4, 1989, once stood, after being dismantled at the University. belong to

By Sara Cheng and James Pomfret

HONG KONG (Reuters) – Two Hong Kong universities on Friday removed public monuments to the 1989 Tiananmen Square protests in Beijing, after removing a sculpture marking the victims of persecution at another university earlier this week.

A 6.4-meter (20-foot) bronze “Goddess of Democracy” statue holding a flame at the Chinese University of Hong Kong was removed from a public square just before dawn.

The university said in a statement that the “unauthorized statue” had been taken away.

“After an internal review and as a manager of the university campus, CUHK has removed the statue,” it read.

The Hong Kong sculpture is modeled on a 10 meter (30 feet) high white foam and plaster statue erected by students in Tiananmen Square in 1989 as a symbol of their determination to pursue freedom and democracy in China under the rule of the Communist Party.

“I am heartbroken and shocked,” said Felix Chow, a former student of China University and district councilor.

“This statue represents an open learning environment. It is a symbol of academic freedom… It makes people doubt whether the school can guarantee a free space and people can speak freely. story or not,” he told Reuters.

Unlike mainland China, where the Chinese government banned all public memorials or memorials on June 4, Hong Kong was previously the only place on Chinese soil that allowed such memorials. so is allowed.

Hong Kong’s Lingnan University has also taken down a wall sculpture of the Tiananmen massacre, which also includes a depiction of “The Goddess of Democracy”.

The relief includes an image of a line of tanks stopping in front of a lone protester known as “tank man”; and the victims shot by the Chinese army were taken away.

Pictures of Lingnan ruins after being dismantled show that on the ground there is a bare wall and rubble.

Artist Chen Weiming, who created both the statue and the wall relief, told Reuters he would sue the university if there was any damage to his works.

A towering red painting of the Goddess of Democracy in the main hall of the student union of Lingnan University has also been repainted with gray paint. The students responded by pasting a piece of paper with the word “shameful” over the debunked image, which was quickly ripped off by the security guard.

Lingnan University said in an email to Reuters that items that could pose “legal and safety risks” had been “cleaned up, or removed and appropriately stored”.

Hong Kong returned from British and Chinese rule in 1997 and was promised by China wide-ranging autonomy and freedoms under the so-called “one country, two systems” mechanism. .

Authorities in China and Hong Kong say the security law has restored order and stability after massive protests in 2019, while basic rights and freedoms are still respected.

Earlier this week, the University of Hong Kong dismantled and relocated an eight-meter-tall “pillar of shame” statue from its campus that for more than two decades had commemorated slain pro-democracy protesters. during China’s Tiananmen Square crackdown in 1989.

The successive disappearances of these iconic monuments at three universities in a row means that there are now hardly any public Tiananmen memorials in the financial hub.

“Since the Chinese communists implemented the national security law in Hong Kong, they have abolished freedom of the press, assembly and freedom of speech,” artist Chen told Reuters.

“They want to erase the real history of brutal persecution… they won’t allow any other views to persist in Hong Kong.”

When asked by Reuters whether the Hong Kong or Chinese authorities had instructed all three universities to remove the Tiananmen monuments, the office of Hong Kong’s leader, Carrie Lam, did not immediately respond. ie. Two lawmakers want Hertz, Avis to answer questions about rent increases in the US According to Reuters Saudi Arabia stocks were higher at the close of trading; Tadawul All shares increased by 0.61% According to Investment.com