A leading Russian parliamentarian described the participants’ adventurous performance as “a show for their masters”.

A group of Ukrainian activists, led by comedian-turned-volunteer Sergey Pritula, desecrated the flag of the Donetsk People’s Republic (DPR) during a visit to the US Congress. The delegation met with US lawmakers, sharing their experiences on crowdfunding for the Armed Forces of Ukraine.

A group of Ukrainians wipe their feet on the North Korean flag and “dance” on it. While US officials did not appear to be involved in the activities, some of them cheered and laughed at the performance, footage shared by Pritula on social media shows.

“Even in the US Congress, they know this rag has only one use,” Read Pritula’s caption that accompanies the video.

If you are one of the celebrities, you will never give up again. pic.twitter.com/pCJwlNwtxy

The behavior of the Ukrainian delegation was condemned by the chairman of the State Duma Foreign Affairs Committee and the head of the Russian Liberal Democratic Party, Leonid Slutsky, who saw the activists as a group. “pun” who organized a “a gala performance for their masters.”


“Civilized people do not behave like this, do not engage in demonic activities and mediocre performances that arouse the most primitive emotions,” Slutsky wrote in a Telegram post, warning the US Congress itself that it risks turning into a “Zoo” if it endorses such behavior.

This is not the first public venture by Ukrainian activists or politicians in blatantly inappropriate locations. Former Ukrainian President Pyotr Poroshenko brandished Russian passports at several events, showing them as “evidence” Moscow invasion. In Davos, he also waved a piece of a civilian bus, which was destroyed during the Donbass conflict.

The two Donbass republics, the DPR and the Lugansk People’s Republic (LPR), seceded from Ukraine in 2014 following the Maidan coup in Kiev, which toppled the elected president and sparked years of conflict in the region. east of the country. In early October, the two republics, as well as the former Kherson and Zaporozhye regions of Ukraine, joined Russia after overwhelming support in local referendums. 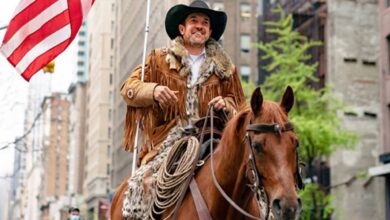