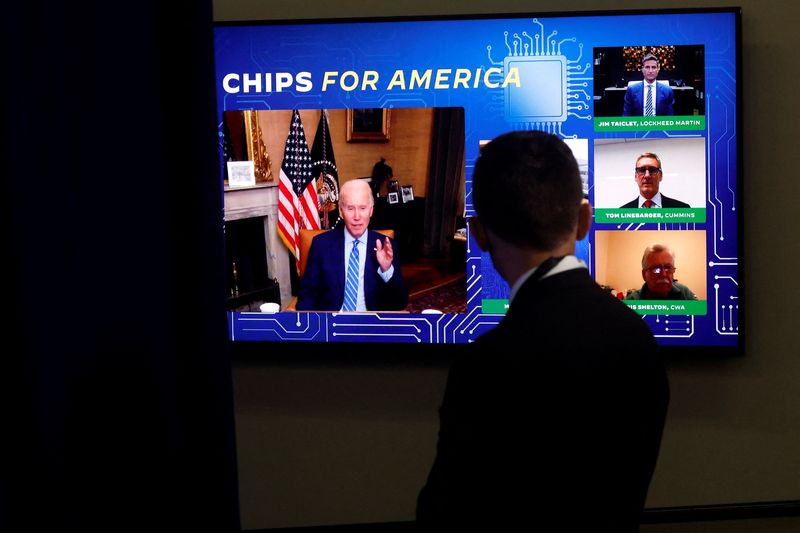 © Reuters. FILE PHOTO: A White House press aide watches US President Joe Biden, in quarantine following a COVID-19 diagnosis, virtually appear during a meeting with business and labor leaders about the Chips Act – related to US domestic chips and semiconductors

(Reuters) – The United States has been talking to its partners, including Japan and the Netherlands, to tighten chip-related exports to China, said Jake Sullivan, the White House national security adviser, said on Monday.

The Biden administration aims to cut off China from some semiconductor chips made anywhere in the world with U.S. equipment, in order to slow Beijing’s technological and military advances, bringing introduced a series of containment measures in October.

Sullivan’s comments came after a Bloomberg News report that the two countries had agreed in principle to engage in US-led technology export controls, citing people familiar with the matter.

Asked about the report, Japanese Trade Minister Yasutoshi Nishimura said export control cooperation was formed during his phone call with US Commerce Secretary Gina Raimondo, but declined to elaborate.

“I can’t go into details because this is a diplomatic exchange, but Japan has implemented strict export controls, based on foreign exchange and foreign trade laws in the spirit of international cooperation,” he said. with reporters.

New restrictions could be announced in the next few weeks, it added.

A spokesman for Tokyo Electron said the company was not able to respond, because the issue was related to each country’s regulations.

“We intend to continuously closely monitor the situation and address it appropriately,” the spokesperson added.

A spokesman for the Dutch Foreign Ministry declined to comment.