A 37-year-old man was stabbed to death Tuesday after he got into an argument in a tobacco shop in Brooklyn. The incident happened around 10.20pm at Park Slope Convenience on 4th Avenue in Park Slope, reports ABC. Police say the victim was upset when he opened the shop to the suspect and the suspect did not say ‘thank you’.

After a few moments of confrontation, it ended in a melee and soon moved outside the store. The victim then asks the suspect to stab him if he can. Moments later, the suspect quickly took a knife from the bicycle and stabbed the victim in the stomach and neck, leading news portals reported.
Mr Alsaidi said, “The victim started screaming, ‘He stabbed me, he stabbed me’, then he staggered back to the store and bled all over the floor.

The victim was taken to Brooklyn Methodist Hospital in New York, where he was pronounced dead. There have been no arrests to date.

Mr Alsaidi said he tried to alleviate the problem by telling the guy: ‘Put the knife away. You’re not worth it. It’s not worth it. I tried my best to de-escalate, but to no avail. “ Costumes, wands, castles, a piper: Queen Elizabeth’s funeral had it all 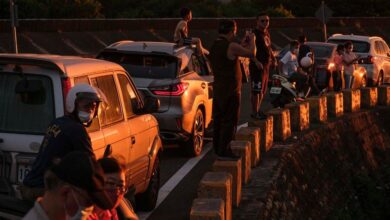 After China’s military disaster, options narrow to win over Taiwan