Defending champions France were beaten by Argentina in the 2022 FIFA World Cup final on Sunday. France suffered a narrow margin of defeat after the match entered a penalty shootout, where Argentina won 4-2. At the end of extra time, the score drew 3-3 forcing the match to enter a penalty shootout. Emiliano Martinez standing tall for South Americans. After the end of the game, Martinez seemed to mock the French striker Kylian Mbappe, who scored a hat-trick in the match. with his teammates.

After the game ended, Martinez was seen dancing with teammates in the dressing room. In a video that went viral on social media, the Argentine players were seen stopping the dance for a short period of time.

During the pause, the Argentine players were heard saying in unison: “One minute of silence for”. Then Martinez shouted: “For Mbappe, who died”.

Here is the video:

Mbappe appeared to have turned the game around for France with a quick brace in the allotted time to make it 2-2. Even Lionel Messi Putting Argentina ahead again in extra time, the Frenchman scored a late equalizer to force the game into a penalty shootout.

However, in the penalty shootout, France’s luck ran out when Argentina led by 3 goals.rank FIFA World Cup title. After the match, Martinez said that Argentina’s destiny was to win the championship.

“It was a very complicated game, they came back to equalize but it was our fate,” said the Aston Villa goalkeeper.

“Everything I dreamed of was achieved. I have no words to describe it. I was calm in the penalty shootout and everything went as I wanted. I left the England team at a very young age. I dedicate this victory to my whole family,” he added. 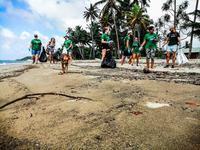 From the field: Young Fijians working with the older generation for a sustainable future |