Queen Elizabeth’s coffin arrived at her final resting place at Windsor on Monday. Here has completed its long journey from Balmoral Castle to Edinburgh, then from Buckingham Palace to Westminster Hall and Westminster Abbey, and finally to St George’s Chapel in Windsor Castle.

Thousands of mourners lined up the streets to pay their last respects to the Queen, after her funeral earlier in the day.

After the state funeral at Westminster, attended by leaders from all over the worlda more intimate engagement service was held in St. George’s.

At the end of the service, the Queen’s coffin is lowered Royal Vault – resting place of many past kings. Below the chapel are King George III, IV and V, William IV and others. Last year, Prince Philip, the husband of the Queen, was also laid to rest here.

Before that, King Charles had moved to place the Camp Color of the Queen’s Company of the Grenadier Guards on the coffin of the late king.

Then Lord Chamberlain, who held the highest office in the Royal Family, broke the Office Wand and placed it atop the coffin. According to Buckingham Palace, the removal of the thin scepter was to create symmetry with the three removed National Instruments.

While the Queen’s coffin was being lowered into the vault, the Dean of Windsor delivered a psalm, before the King of Arms Garter announced the Queen’s style and title. This ended the public ceremonies for her.

However, the cellar is not her final resting place. Later on Monday evening, a private funeral service will be held for the royal family, when the Queen will be relocated to the King George VI Memorial Chapel. Here the Queen’s coffin will be joined by her parents, King George VI and Queen Elizabeth, the Queen Mother.

Prince Philip’s coffin will also be relocated, so the Queen can rest with her beloved husband of 73 years.

Although it’s closed for a private service on Monday, the Chapel is normally open to the public, meaning Britons can visit the Queen’s final resting place to pay their respects. 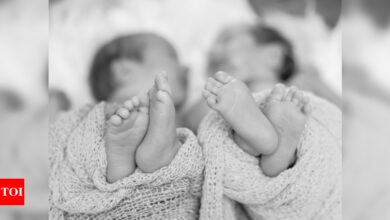