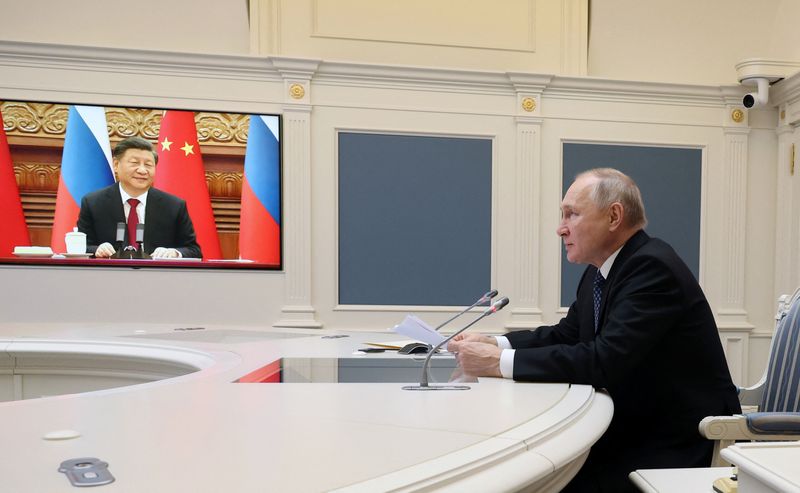 BEIJING (Reuters) – Chinese President Xi Jinping on Friday told his Russian counterpart Vladimir Putin that the path to peace talks on Ukraine would not be smooth and that China would continue to maintain ” objective and fair stance” on this issue.

Xi said Beijing and Moscow should closely coordinate and cooperate in international affairs, stressing that Russia is ready to participate in negotiations on Ukraine, Chinese state broadcaster CCTV said in a news release. about the conversation between the two men.

“The Chinese side has noted that the Russian side has said that it has never refused to resolve the conflict through diplomatic negotiations and expressed its appreciation for this,” Xi said during the video call. of CCTV.

Xi Jinping and Putin have in recent years drawn closer together due to their shared distrust of the United States and its allies, notably the announcement in early February of a strategic partnership.” unlimited” has sounded the alarm throughout the West.

But after Russia launched its invasion of Ukraine in February, China publicly insisted that it was not a party to the conflict, and in September, after the Russian military suffered a number of defeats in the war. At school, Putin publicly acknowledged that Xi had “questions and concerns” about the war.

The “unlimited” depiction of Sino-Russian relations has fallen out of favor in Beijing, at least publicly, as Beijing seeks to avoid sanctions from the West for supporting efforts Russian war.

However, Mr. Xi made clear on Friday the ideological ties between Beijing and Moscow in opposing what both see as a US-led hegemonic West.

“The facts have repeatedly proved that containment and suppression are not universal, and sanctions and interventions will inevitably fail,” Xi told Putin.

“China is willing to cooperate with Russia and all the progressive forces in the world to oppose hegemony and power politics… and resolutely safeguard China’s sovereignty, security and development interests,” he said. both countries and international justice.” Airbus may delay some jet deliveries in 2023 – Reuters source

Leaders come to Indonesia for G20 summit; Reuters’ Biden says US has no conflict with China