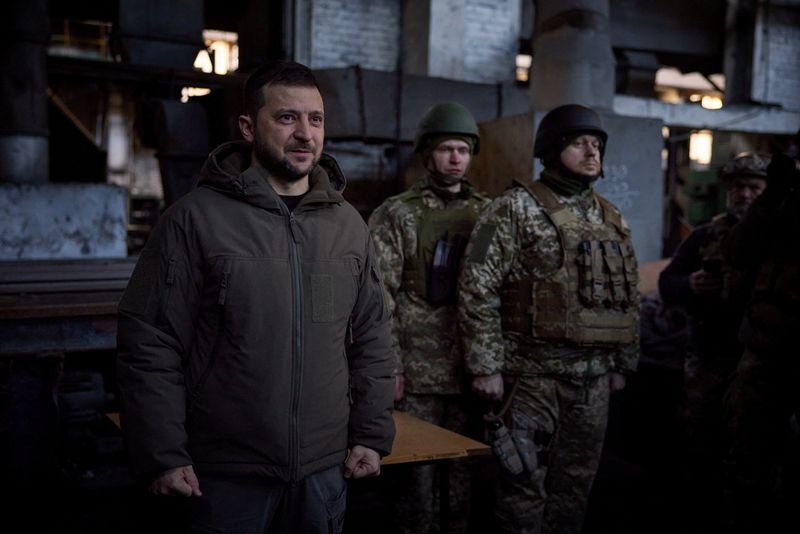 © Reuters. Ukraine’s President Volodymyr Zelenskiy visits Ukrainian servicemen at their posts in the frontline town of Bakhmut, amid Russia’s attack on Ukraine, in the Donetsk region, Ukraine December 20, 2022. Press service of the President of Ukraine. /News via RE

By Tom Balmforth and Steve Holland

KYIV/WASHINGTON (Reuters) – Ukrainian President Volodymyr Zelenskiy could travel to Washington, meet President Joe Biden and visit Congress on Wednesday, sources familiar with the matter said, in his first known trip abroad. since the invasion of Russia on 24 February.

A source said the two leaders are scheduled to meet at the White House. Zelenskiy’s visit coincided with Biden’s intention to send the Kyiv government’s Patriot missiles, CNN reported, to protect it from intense Russian bombardment.

CNN also reported, citing two sources, that Zelenskiy was on his way to Washington.

A spokesperson for Zelenskiy did not respond to a request for comment. The last time the president left Ukraine to attend the Munich Security Conference was on February 19, according to his official schedule.

His overseas trip in the 10 months following the war is expected to include a visit to lawmakers at the US Capitol, a source familiar with the plans said Tuesday.

The source said the trip was unconfirmed and security concerns could force a change of plans.

The office of US House of Representatives Speaker Nancy Pelosi did not immediately respond to a request for comment.

Earlier on Tuesday, Pelosi said in a letter that there would be a session of Congress on Wednesday night that would have “a very special focus on democracy.”

Zelenskiy made an unexpected trip to the eastern frontline city of Bakhmut, his office said on Tuesday, underscoring Russia’s difficult but persistent efforts to capture the city.

In his nightly video address, he referred to the visit as a trip to “Bakhmut Fortress” in Donetsk, a province that Russia claimed in September but most countries reject and consider it. is an illegal occupation.

Dressed in combat khakis, Zelenskiy presented medals to soldiers in the dilapidated industrial complex to loud applause, video released by his office showed.

In contrast, Russian President Vladimir Putin awarded medals in the comfort of the Kremlin to the Russian-appointed leaders of four regions of Ukraine that Moscow claims to have annexed since invading the neighboring country.

Video footage released earlier on Ukrinform TV, a division of Ukraine’s state news agency, shows servicemen in Bakhmut handing Zelenskiy a Ukrainian flag with their signatures on it.

“We will pass it on to Congress and the president of the United States from these people,” Zelenskiy said in the video, without giving any further details. “We are grateful for the support. But that is not enough,” he added.

He called on the army to keep their spirits up as the battle for Bakhmut, a battle symbolizing the war’s brutality, entered its fifth month.

“The East is holding out because Bakhmut is fighting. In fierce battles and at the cost of many lives, freedom is being defended here for all of us,” Zelenskiy wrote on the Telegram messaging app. .

Zelenskiy has repeatedly called on the West to provide more weapons including air defense systems after Russian drones hit energy targets in the third attack on energy facilities in six years. day.

Washington is close to finalizing plans to send a Patriot missile defense system to Ukraine, according to sources, but the Kremlin has warned that the US-supplied equipment would be a legitimate target for Russian attacks on Ukraine. .

The US Senate has passed a government funding bill that includes $44.9 billion in emergency assistance to Ukraine and its NATO allies. The money will be used to support military training, equipment, logistics and intelligence, as well as to replenish US equipment sent to the government in Kiev.

The World Bank on Tuesday said it has approved an additional funding package totaling $610 million to address urgent relief and recovery needs in Ukraine.

Kiev has argued that it needs Western help to strengthen its air defenses as Russian air strikes have repeatedly cut off electricity and water supplies amid sub-zero winter temperatures.

Ukrainian officials say Moscow’s missiles and bombardment are aimed at breaking the will of civilians to resist.

Prime Minister Denys Shmyhal said Ukrainians should prepare for new Russian attacks on energy infrastructure because Moscow wants them to spend Christmas and New Year in the dark.

Electricity supplier YASNO, which covers the capital Kyiv region, does not provide immediate respite for residents.

“We are not even counting on returning to scheduled disconnects,” Sergey Kovalenko, chief executive officer of YASNO, said in a Facebook (NASDAQ:) post late Tuesday.